The Muse and Whirled Retort December 2020 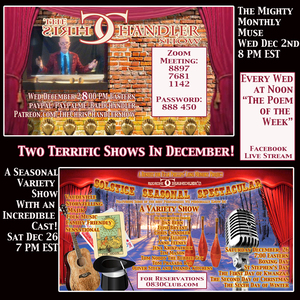 Hey Everybody!
Happy December to you.
This will be the last one of these for 2020!

I got a couple three, maybe four big announcements for you!

SECOND: The Mighty Monthly Muse is also the first Wednesday of the Month at 8 PM EST
This week we will have Special Guest Sean Shanahan.
AND for the first time be restreamed on YouTube and Instagram.

Make your reservations!
You can pay Zero, if you have Zero... no one turned away for lack of funds, more if ya got it... suggested price $20
you do have to make a reservation and a zoom link will go out.

Oh, Yea! I want to see The Solstic Seasonal Specatcular!
or paste https://0830club.com/product/solstice-seasonal-spectacular/

FINALLY:
Happy Holidays - this is a gift if you are low on funds - pay what you want (can) suggested $15 for this

HOLIDAY CLASSIC
the Three Kings of Memphis
Happy Holidays enjoy this Holiday Classic. It is about a twenty minute (seemingly traditional) story, but with a twist.  It is also true! This is a collaboration between Chris Chandler and John Elliott, and is now a holiday Classic in Two parts.

I want the Three Kings of Memphis
or click https://thechrischandlershow.bandcamp.com/album/three-kings-of-memphis
*************
The Muse and Whirled Retort
December 01, 2020
Highland Park, NJ

As we approach the holiday season in this oddest, year of my life, I think to things I am thankful for.  I am thankful to be healthy and living safely with a wonderful partner, Kimberly, as we approach our one year anniversary.  We have been so fortunate to be under the same roof and get along so well and continue to inspire one another in this time of crisis.

I am thankful that as a lifelong performer, I have found a way to evolve and adapt by doing my little Zoom and Facebook live streams - a show which is ever evolving...  But, enough about that for now.

Many of you know that before I was a performer, I was a stage lighting guy, and I am proud to say that every nickle I have made in my life has been on or around the stage.

I bring this up at this time of year for a few reasons.  First, it around Christmas, when I was thirteen.  There was this garage band up the street (and I know I have told parts of this story before, but the roads I have been on are capable of taking you many places) They were around sixteen - and didn't want to hang with a thirteen year old - so, I had to create a reason.  What I came up with was this: going around the newly built subdivisions -- that had decimated "my" woods and paved "my" dirt roads, forever blemishing the bucolic beauty of my upbringing -- and stealing all the Christmas lights so that I could take them into my highschool shop class and become "the lightman."

I dropped out of school, shortly thereafter and went on the road with punk rock bands through the late 70s and early eighties.  My poor mother.

Eventually, I returned to a school for drop outs - where they had a progressive program devised by Jimmy Carter when he was governor.  They decided that if you finished in the top ten percent of the school for dropouts, you could get a scholarship to the local community college, where you could learn how to... I dunno... be a fork lift driver.

Well, finishing in the top ten percent of the school for drop outs is like having the best 100-yard dash in the emphysema ward.

I got that scholarship to the local community college - where I studied (yes) stage lighting.  After having years of experience from working with the punk rock bands - but I was totally self-taught and really needed the training. I proceeded to get good at it and in two short years I managed to get a scholarship to a prestigious university, to study, (yes) stage lighting.

There, my mentor was a feller name of Jim Albert Hobbs.

He had come out of old school lighting and did not like these digital moving lights that were just being born.

I became the chairman of a student group that put on original plays and performances.  He began working out magic tricks with a fellow student Thom Lima "Bean" who had trained as a clown.

I started working as a busker on the streets of Winston Salem.  He began working with puppets.

I bought a (very) cheap guitar and held it as I performed monologues (which made me a folk singer.)

He made a mechanical organ grinder.

I evolved my performances into this punk folk acoustic tirades of funny... making Ronald Reagan jokes with a Dead Kennedy's style assault on a twelve-dollar acoustic guitar.

He started working on a flea circus.


When it came time for me to graduate, I took a stab at stage lighting and even landed a job as an assistant lighting designer on Broadway.  (and I know I have told parts of this story in other pieces, but like I said my roads have taken me many places, so I will skip the details of being encouraged by none other than Pete Seeger to give up lighting and keep doing this new style of folk music I was creating.) My poor mother.

Jim also, quit stage lighting at that same time, and resigned his professorship at The North Carolina School of the Arts to start a flea circus - The Jim Alberti Flea Circus.

I begin getting bookings, and made my (well very meager) living at it for well over thirty years.

Jim began playing at bigger and bigger festivals, like Merle Fest and Bonnaroo.  His flea circus became so well known (albeit to a very small demographic) that it was even an answer to a question on Jeopardy.

I talked to Jim Albert Hobbs a couple of times a year and would always visit, when our paths crossed.  I always made a point to call him over the holidays.

Last year around this time, when I phoned, he did not answer.  I tried again regularly over the coming months and eventually his answering machine was full, then his website when down, and then the number was disconnected.  I called around to people that knew him, and no one had an answer.  I looked for an obituary, but could not find one.  I contacted the School of the Arts and they told me he had passed.  I mourned his death, and became resolved to write an obituary, I reached out to folks who knew him better than me, and eventually came across Thom Lima "Bean'" the clown.  He lives in Australia now.

He told me - no, he is living in an assisted living home in Winston Salem.  I started calling and after reaching out to about twenty such facilities I finally found him, on Thanksgiving Day.  He is alive and well and convinced he will soon take the Jim Alberti Flea Circus out on the road again.

This is why, as I was saying at the beginning...

As many of you know I started off the year of lockdown on St Patrick's Day here in Highland Park NJ performing "The Poem of the Day."  I did about 100 of them every day until switching to once a week.  "The Poem of the Week."
and adding a full set once a month. "The Mighty Monthly Muse."

I am thankful that as a lifelong performer, I have found a way to adapt, it has been evolving in ways I didn't think of when I started.  The first time I held a red towel in front of the iPhone and used it as if it were a red curtain.

Next thing I know, I am adding other theatrical elements, and before I knew it I was building a full cardboard stage to perform my shows in... shows that have evolved from that same Dead Kennedy's style Acoustic guitar bombastic rants.

This endeavor in no small way has been inspired by my mentorship from Jim Albert Hobbs.

The answer was obvious.

One thing led to another, and I decided to build a full-on puppet theatre, complete with a flying curtains and working foot lights and a ghost light.  Did you know they make doll house sized PAR cans?

I had used the new theatre exactly once, so when I spoke to my friend - very much not dead - I got to tell him about the Grand Opening of the new Jim Alberti Theatre.
*************

I want to support the Chris Chandler Show
or paste www.paypal.com/paypalme/baldchandler

or if you would like to be a continuing subscriber

I want to be a continuing subscriber
www.patreon.com/TheChrisChandlerShow

and please subscribe to my YouTube Channel
Sorry the link is so complex - need to fix that...
I want to subscribe to your you tube channel
https://www.youtube.com/channel/UCSOeQauM6Y0UM4OT4lQwdIA