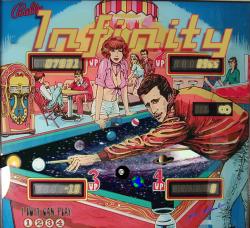 Sorry to bother you but  as I have every year since January second of 2002, I must write to you this year on 8-8-8 to celebrate the number 8.

SOOOOO. This year's missive is brought to you by the number 8.

When we count -- we count in base 10 because we have ten fingers.  (The Myans, they counted in base 2  because they didnt wear any shoes.)

As for me,  I learned to count from Sesame Street  only it was confusing because the count in Sesame street only had four fingers.  I thought he should be counting in base 8.

Most cartoon characters have 8 fingers.

This has left me confused  I learned to count in base 11  because I had my hands in my pockets.

In the end  there are ten types of people in this world.

Those that know Binary and those that don't.

It is two cubed  how bout that?   It is the atomic number of Oxygen.

Ooops, I could have had a V-8.  hows that for an advertising slogan?

I have an idea  lets make a health drink and name it after a muscle car engine. "That thing got a hemi?"

The real reason we need to celebrate the number 8 is that after 8 years we are finally getting rid of the little "W"easel.

As I look into my majik 8 ball and see that he finishes without impeachment he will be only the 12th full 8 (in a row) year presidents.

The number 8 sideways is the symbol if infinity.  Perhaps because the number 8 represents what is beyond time  for there are 7 days in a week.

I always thought that was funny when I played 8-ball.  Depending on how the ball is sitting  you say "infinity in the corner pocket."

In Christianity, Jesus speaks in The Sermon on the Mount of the eight Beatitudes.

In Buddhism The Dharma Wheel has 8 spokes. The Buddha's principal teaching -- the Four Noble Truths  expands to The Noble Eightfold Path. The branches of the Eightfold Path are embodied by the Eight Great Bodhisattvas (Manjushri, Vajrapani, Avalokiteshvara, Maitreya, Kshitigarbha, Nivaranavishkambhi, Akashagarbha, and Samantabhadra)

Hanukkah is an eight-day Jewish holiday that starts on the 25th day of Kislev.

In Hinduism, The Goddess Lakshmi has eightfold forms for it is the number of abundance and the eight seats of wealth.

In Daoist mythology there are eight immortals that can assign a tool to give life or destroy evil.  The tools are known as "Covert Eight Immortals."

Perhaps this is why the Olympics are starting in Bejing on 8-8-8.  Only  thats the date on OUR calendar  so much for that theory.  So maybe it has to do with the fact that they had a bloody civil war in around 300 AD known as the War of Eight Princes.

In Islam, there are eight Angels carrying The Holy Throne of Allah.

There are 88 keys on a piano.  There are 8 strings on a mandolin. And a Bazooki, and A Quatro, and ummmm. A twelve string guitar with four broken strings.

On the musical scale two notes that are 8 whole notes apart -- or an octave - are known as the same note.

I first learned this while listening to "Eight Days a Week"  on  8 -Track.

There are "eight maids a milkin."

A stop sign has 8 sides  well 10 if you count the front and back.

A figure skater skates in a figure 8.

My hero, Archie Manning wore number 8 for my beloved New Orleans Saints. His two sons both won super bowls because of it.  Archie however, never gave the Saints a winning season.  Neither did anyone else though, for a long time.

My personal favorite is in a festive production when the follow-spot "Ballyhoos" through the audience it follows a figure 8 pattern.  Therefore 8 is the number of "Fabulous."

There are 8 ounces in a cup, 8 pints in a gallon and 8 furlongs in a mile.

"Section 8" refers to crazy  and I have always loved the game crazy 8s.

8 legs on a spider, 8 arms on an Octopus.  I wonder if they are related.

"Oct" ober is the 10th month  which never made any since to me  but I think it had to do with the vanity of some Roman Cesar or another  I bet it wasn't "OCT" avia.

Oh by the way, I am writing this while staying in a super 8 motel right now in Eureka, CA.