from Live From the Wholly Stollen Empire


A Funny Thing Happened on the Way to the Abyss

(a fable in E sharp)

There is a fact that is widely known

that fossil fuels have destroyed the ozone.

If you think about it, it is weird to think

that dinosaurs will make us extinct.

As we shuffle off this mortal  coil

a new dominate species will emerge from the primordial soil.

Next on the evolutionary chain

scientist think it will be cockroaches that grow a forebrain.

will wind up as statues  on some bug's goofy golf courses.

Yes, it is a fact that it is nature's way:

our flesh was once primordial clay.

We have dumped so much plastic into the dirt

that the futures grass came up as Astroturf,

so many fluorocarbons into the ozone

that the clouds became Styrofoam.

Next came blooming fields of dacron/polyester and living aluminum trees

Then one day, in an obscure laboratory,

a silicone based scientist made a discovery that filled his Tupperware heart with worry.

He scrutinized the formula with maticulos care

for he had found the formula for fresh country air.

He shouted, "Eurika!" as he checked his edition.

Then he quickly erased his chalkboard  saying," That stuff will destroy our entire eco-system,

It would turn the world into in an uninhabitable, natural place.

What kind of fool would use science to destroy his own race.

Song By: The Flying Folk Army 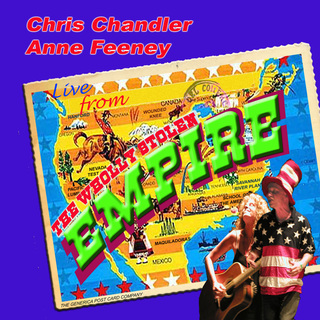