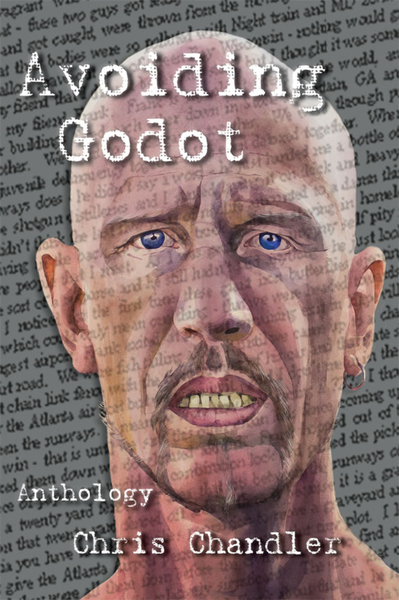 Ninth Wave Publishing
A Note from Chris:
Much has changed in the last 25 years.  When I first started my Volkswagen and put Stone Mountain, Georgia in my rearview, Reagan was president.  Gasoline was less than a dollar a gallon.  The cold war was warm.  The internet had seventeen users and I was not one of them. Iran and Iraq were at war with each other. I had hair.  I was writing material about Oliver North, Larry Flint and Jessie Helms.

It is as far from Key West, Florida to the Alabama border as it is across Texas.  Either one is twice as far as it is across the whole of the UK.
I know this because there is not an interstate highway in the United States that I have not been on.  I have sung in truckstop parking lots trying to get gas money to make it to a demonstration or festival.

I have been through two volkswagens, a Chevy LUV, A Datsun pick up truck, A Dodge van, Two Ford vans, A Ford Pickup Truck, Two Subaru station-wagons, and a Saturn station-wagen.   Long may you run.

I hit the road in May of 1988, the year I graduated from the North Carolina School of the Arts.  At college I had gotten involved in a student group called Onyx that produced original student plays.  Although it was a highly competitive school where I was studying to be a stage lighting designer, I was equally competing with my own conflicting ambitions.

Onyx gave me my first taste of public performance.  But no matter how you carve it, it takes a while to put on a play and I had begun writing skits and monologues faster than I could get them in front of an audience.  So, I took to the streets and began performing them for unwitting passersby in Winston Salem NC.

I noticed that people just walked by be thinking the guy on the street corner talking to himself must be crazy.  What can I say? This was before the Bluetooth cell phones. I think those people are crazy, but I digress. My way around this was to borrow a friend’s guitar.  I didn’t even know how to play guitar, but by strumming it while I told monologues on the street corner made me a folk singer.  I started gathering small crowds.  People actually put money in the guitar case.  Can you believe it?  I didn’t.

When I graduated, I was going to go across the country auditioning as a lighting designers at theatres.  At that point I had not been beyond the states that bordered Georgia.  In order to finance this summer wanderlust, I performed on street corners and subways.

I actually landed a job as an assistant Lighting designer on Broadway, but I was having so much fun as a street musician I turned it down.

I have not looked back.

In the early days, I had a double cassette boom-box that plugged into my cigarette lighter and as I rolled down the road I duplicated tapes and sold them from my guitar case. The covers copied at xerox machines in pharmacies that require one to put a dime in a slot in order to get a copy.  There was no Kinkos.  They had titles like “Stranded Musician Needs Gas Out of Town.” And “What? For This Price You Want Packaging Too?”

It was in Boston at Harvard Square that this Georgia boy fell into his own.  There I found a community of like minded rebels and street performers.  I joined a commune.  I was lucky enough to have stumbled into that scene as a new folk explosion was detonating.  I can think of dozens of folks that I either played the streets with or jockeyed for position at open mics with that are also celebrating a 25th anniversary about this time.  Most are still making a living at it.

Being around those talented and knowledgeable folks was was luck.  Nothing premeditated about it.  Just dumb luck.  I am also lucky to have been mentored by the likes of Phillip Rockstroh well before my college days and beyond.  He cam along for a spell on that first trip.  He is a fine writer in his own right and you will find several pieces that we collaborated on especially the the first decade.  I recommend you seek out his work.

Also, I was lucky enough to bump into Anne Feeney early on, at a time when I was considering giving up.  She took me to my first demonstration and inspired and encouraged me to keep writing.  She remains my heroine.  Iw as lucky enough to tour with her for about 6 years and we made two records together.  We still call them records.

I recommend you check out her work.

Over the years I have been lucky enough to team up with some of the greatest people I know of.  It was back in Boston that Raelinda Woad suggested I set down the guitar and just do the monologues.  Holy Cow was she right!  I am the worst guitar player who ever managed to make a living at it.  I had landed a Record Deal with Flying Fish Records around 1992, and yes, that was a huge accomplishment but no one was buying a ticket to hear me play the guitar and especially not sing.

Instead, I found people that could play and that could sing!  And boy did I!

If nothing else my bands have been as good as it gets.  Amanda Stark, David Rovics, Samatha Parton, Oliver Steck, Niki Leeman, Laura Freeman, Frankie Hernandez, Chad Austinson, Magda Hiller, Anne Feeney, and Paul Benoit to name a few.  Thank You ALL!

I hope you enjoy these.  They are divided loosely by themes and in no chronological order.  I just tied to select ones that seemed to go together.

I am looking forward to the next Twenty-five!