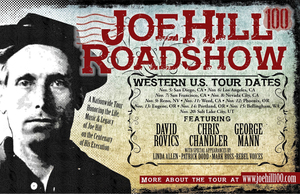 Hey Everybody,
Sorry I have not been as consistent with my newsletter as I once was.  I must change that.

The Truth is I have not been doing as many shows as I used to so I did not write - I am not sure why that is.
I mean most of you who read this are all over the country and could not come to many of the shows anyway.
I get your notes saying you miss your whirled retort - so i will soldier on.

NEWS: I have a new single coming out with my good Friend John Elliott. on (Yes ) Black Friday!    It seems to  an appropriate date for it is a 15 minute monster of a holiday tale called The Three Kings of Memphis.

For now it will only be available as a digital down load.  We had hoped upon wishes that we would get it on vinyl, alas...

So, I am very much looking forward in taking part in the Western Leg of the Joe Hill Traveling Road Show with My friends David Rovics and George Mann.

This tour is being made possible by many and there will be some live broadcasts!
If you would like to support this very important work you can do so by following this link.

The Billy clubs of Ferguson, the tear gas streets of Occupy killed you Joe?
They ran you out of town says some?

It takes more than that to shut us down,
Which is why, we'll stay right here.
Which is why we will not die.

And standing there as big as life...

...is the work of United Students Against Sweatshops,
The School of the America's Watch,
the United Mountain Defense,
Black Lives Matter,
Food Not Bombs,
Earth First! and Nurses without Borders.

All -- and many more -- struggle to organize a world in which all people live in freedom from oppression...
valued as whole human beings...
rather than exploited in a quest for productivity under the rule of the wrong kind of profits.

THEY WENT ON to Organize!

Organizing as they fight police brutality.

Organizing as they fight the prison industrial complex.

Organizing as they fight to force queer and transgender issues onto the agenda.

Joe Hill is ALIVE in those who went on to organize!

Those who went on to organize...

For I did not dream I saw Joe Hill Last night...
I AM JOE HILL TONIGHT!

I am Joe Hill, today.
I will be Joe Hill tomorrow.

Jen and I lost our right hand man on Oct 28. Here is a little poem I wrote for JC while visiting him in the hospital.

Here in San Francisco, like so many times before, with JC.
Surrounded by beautiful talented caring women.
Honestly, dude I have no idea how you do it!
Tonight, it is Paola, Kay, Donna and Jen.

New Orleans music on a boom box by his side.  Streaming WWOZ.

Pictures of you on the bulletin board,
going down a zip line,
in a dune buggy,
Mardi Gras beads, parade in the back ground,
wearing some leather pants.

Wake up dude, I am pretty sure that nurse has a crush on you.

I bet if you were here visiting me, you'd already have a full hospital access pass, and be on a first name basis with the entire staff.

But tonight is different. Yes, the beautiful women are here. The music is here. Your spirit is here, even you are here... In a sense...

...Tomorrow you will be giving once again. Giving as you always did.

In truth though I will do my best to take away the only thing I can.
I will take with me: the way you changed me by knowing you.
I will try to emulate, the way you would behave. Caring. Giving. Effortless. Selfless, timeless, jovial, fun,
and always...
a finger on the pulse,
and the other hand holding the hand of forever.
****************

Jen is createing a new Video for him using a song I recorded with David Rovics and Samntha Parton back in the day...

It is Beautiful as is everything she does...
I think what a wonderful thing - when someone close to you passes create something beautiful for them.

Perhaps she will have me share it when it is done.

If you can spare it please help support this project by clicking on this link.
https://www.gofundme.com/Joe-Hill100

You could get valuable premiums including CDs from David, George and me.