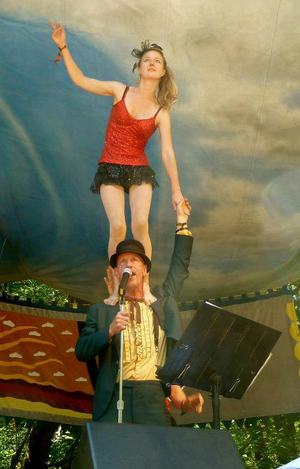 The Flying Poetry Circus and Traveling Multimedia Medicine Show
With Kazum! and The Chris Chandler and Paul Benoit Show and very special guests!

Hey Everybody,
It is that time of the month again.
July is always a busy one for me – lots of festivals and shows and holy cow life is a fun ride!

But because it has been so busy – I haven’t really had a chance to flush out some of these thoughts. So I just decided to list them.
Ya know how on facebook – your little tag line always starts with your name?

So I put them all in that format. Here we go…

…has made it official - this is the official site of the 20112 Olympic Games in London.

… looks at his watch (which is his cell phone) and shouts "Danged rollover minutes… now time is not on my side it's on my back."

... pictures an old movie style poster with a picture of three swordsmen as "The Free Marketeers and a caption reading "All for one and none for all."

... looks out his window and sees closed factories and a homeless guy by the interstate, with a sign that reads: "American Idle."

... believes billboards form in first light shadows, inviting us all to focus on something other than the beauty that is already there.

…thinks hard work is like bathing. Ya gotta do it everyday - or very soon it's like you never did it all.

…is trying to figure out the difference between flexibility and indecisiveness.

… is pretty successful at meeting expenses… in a singles bar.

…thinks just because you are right doesn’t mean I have to agree with you.

…is trying to imagine a hypothetical situation.

... is working as a stagehand striking the stage for Earth Day in the rain. Should I complain?

... sees oncoming head lights parade by like sad clowns or full moons looking down on an awkward girl with a nervous laugh and a British accent in a distant city.

... is wondering if his car is cluttered or this is his own quirky aestheticism

…was afraid of facing his fears so he turned his back on them and saw all of the hope and inspiration that trailed behind.

... is reading Aleksandr Pushkin while listening to Southern Culture on the Skids.

... figures, if life were easy everybody would be having one.

…is very thankful for the life he has.

I REALLY need your help getting the word out for this very special show at the Alberta Rose Theatre!

The Flying Poetry Circus and Traveling Multimedia Medicine Show
With Kazum! and The Chris Chandler and Paul Benoit Show and very special guests!

This will be an incredible show!

Saturday, August 18th, 2012 7 pm
at Joe's House
House Concert
RSVP Through my friend Tom h2odog19@yahoo.com. phone is (831)475-1305
Santa Cruz, CA
This will be an incredible evening! Joe (our Host for the evening) is a world class brewer and his band "Pour House"" will open the show

Wednesday, August 29th, 2012 8:00 PM
Berkeley
Starry Plough
CHRIS SOLO
3101 Shattuck Ave (between Prince St & Woolsey St)
Berkeley, CA 94705
PURCHASE TICKETS ONLINE: click here
website: http://www.facebook.com/pages/Berkeley-Poetry-Slam/56551409302
This is a Poetry Slam Feature. I will be doing about a half an hour as a feature on a terrific evenings entertainment. Seating is usually tight. Doors at 8 PM I will likley be on at about 9 PM