The Muse and Whirled Retort November 2020 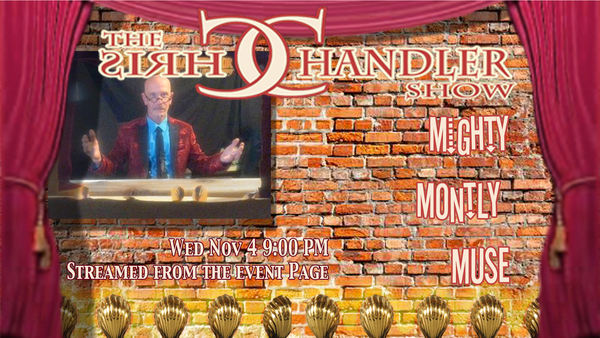 Welcome to the new abnormal.

You might have noticed things are getting weird out there.
Yesterday, Kimberly and I had to evacuate our apartment in Asbury Park due to a bomb threat at the little Haitian Church next door.

I am not saying that voting tomorrow is going to make things less crazy, but I know for sure that NOT voting will ensure things remain crazy.

Halloween was a full moon, a blue moon, a Saturday night!  That only happens once in a life time.  We did not take it lightly.  I give thanks.

Before I move forward with this monthly Missive... a couple of pieces of house keeping which I will repeat at the end.

*****
I hope my single, "Down is the New Up," has a short shelf life - it is a ten minute scorcher.  You can stream or down load it here for free - Or Pay anything ya want if you can.  I never want money to be the issue.

To do that click here: I Want to Hear The New Chandler Single for free!

a full set from yours truly.
The first Wednesday of every month at 9 PM
and this month I will be doing it from the Facebook event page:
Oh, hell yeah - I am not missing Chandler's Mighty Monthly Muse Wed at 9 PM Eastern


Or paste: https://fb.me/e/4IwsA59sL
*****
Finally:
If you can afford to help support this news letter and these broadcasts in the age of lockdown you can make a contribution to:


But this is not the Thanksgiving we celebrate.

Pumpkin Pies, Turkey and Green-Bean Casserole, small children tracing their fingers onto construction paper in order to turn it into a turkey. dressed as Pilgrims and Indians.

Do you know what the language the Indians spoke in 1621 when they first laid eyes on the Pilgrims?

Less than ten years after Columbus' voyage the first dozen Native Americans (not that they would have called themselves that) from what we call New England were off visiting Europe and learning European languages. Granted - this was not a sight seeing trip they chose to make like the Pilgrims did. Few would return.

By the 1600s Native slaves were the chief component of America's Gross National Product.

In 1605 the English Captain John Weymouth returned to Europe with a payload of twenty Indians chained in his cargo. Among them was Tisquantum, (The Indian that first approached the staving Pilgrims.) He managed to return to New England as a part of the cargo of Captain John Smith (yes that John Smith) in 1614 on Smith's first visit to America. However, members of his crew had other ideas. Tisquantum was again sold into slavery but freed by Friars in Spain, educated (at least to the ways of Europeans) and brought back as a guide in 1619. He had actually hung out as London as an English speaking freed slave.

Understand that when the Pilgrims arrived in December of 1620 - which is incase you hadn't noticed - cold in New England. Things were not going well already. Poor piloting had wasted precious time and it was now late in the year. That first winter was not pretty.

The Pilgrims were starving. They spent their first weeks surviving by sending out armed parties who stumbled upon the remains of an Indian village that had been abandoned for the Winter. They broke into homes and stole stashes of food that had been left there. Survival.

If anything the first "Thanksgiving" consisted of an entree of looting. But that is not the one we celebrate.

Even after the Plymouth colony had a good year under her belt, the Pilgrims were still not doing so well. Neither were the Wampanoag. They were in a state of war with the Narraganset and The Massasoit. The Pilgrims had something they could use - and vice versa.

Tisquantum and friends showed up saying, "Ya know you goys look pretty hungry, maybe you should eat some of these pumpkins we raised, and maybe ya should get over that weird religious aversion to Lobster - we go plenty of them running around on the beaches - and while were at it - those guns you got... we could use a few of them... The Pequit they are really starting to piss us off."

Yes, the first thanksgiving was indeed an arms deal. And so began a series of pacts, alliances, allegiances, and affiliations that all seemed to end with Europeans on top.

I like to think of Thanksgiving as -- well... just that. an almost Pagan ritual where we can celebrate the bounty of this life. Give thanks for all we have, and frankly we do have alot.

My favorite Thanksgiving took place when I was living in Canada. (where they don't celebrate it.)

I was living as a street musician in a tourist town in the early 90s living in a shack in a lumber yard, paying literally a hundred bucks a month Canadian to live there. Things were bleak.

I know you think Canada is a socialist country and all - so I could have gotten some kind of assistance. But no, I was a Frost Back: an undocumented worker - working below standard wages to entertain the tourist class.

No Thanksgiving for Chandler.

Because they don't celebrate Thanksgiving - they deliver the mail on the fourth Thursday in November. My mother timed it perfectly.

She was distraught by the fact that I was living in land with no Thanksgiving so she mailed me a can of turkey meat, a box of stove top stuffing, a jar of cranberry sauce and a can of green beans. Holy Moley!

Finally:
If you can afford to help support this news letter and these broadcasts in the age of lockdown you can make a contribution to: