The Muse and Whirled Retort December 2011 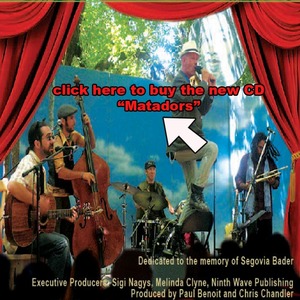 THIS IS A SPECIL ENCORE HOLIDAY EDITION!

BUT FIRST! what holiday would not be complete with out
The new Chandler/Benoit CD titled "Matadors" !

It is done and on the shelves here in our little basement in Oakland, CA

Thanks to those of you who contributed!

You could order your copy of it right now for only $15 by clicking on the picture of the album cover or right here:

I Want The New Chandler CD!

AND SECOND!
Jen and I have the Celtic Art Studio up and humming -
2012 Calendars, Datebooks, T SHirts Fine Art Prints and brand new Keep-Sake boxes
all appropriately festooned with Jens scrumptious artwork!

please visit us at www.celticartsudi.com
AND NOW ENOUGH OF THE CRASS COMMERCIAL ANNOUNCEMENTS

I have been watching the History Channel's new series called Ice Road Truckers ®.  Many wondered why the show was picked up by The History Channel but if you think about it, with the melting polar ice caps the whole concept is soon to be well. . .  History.  In fact they are already in production for next year's season to be called The North Pole Midshipmen.

Henry Hudson and Stan Rogers would be proud.  We have found the North West Passage.  The big disappointment though is Santa has been forced to relocate his shop.  It was a move that did not surprise many toy manufactures.  It had been projected for years.

It seems the global warming problem coupled with the rising cost of reindeer feed and new demands made by the Elves have caused the economic viability of The North Pole facilities to become obsolete.  Rising demand by American children insisting higher and higher quantities of T.M.X. Elmo eXtra Special Edition, Pleno the Dinosaur, and Fisher Price Lil Super Star Sing Along Karaoke Machine had sent the Elves into triple overtime.  Santa simply had to find someone of a similar height to keep up with demand.

The Choice was obvious:  Chinese Children.  It seems the sweat shops in China are well equipped to keep up with demand and Chinese Children will work for less than those pudgy cookie eating elves.    So this year the sleigh has been replaced with a rickshaw pulled by a team of Chinese flying water buffalo.  Donder, Blitzen and the gang have found work in this season's long awaited sequel "Crouching Tiger, Flying Reindeer."

Hardest hit by all of this are the Elves that are now seeing 80 percent unemployment - especially after an embarrassing incident in a celebrity dance competition.  Besides Santa, the only regular hirer of Elves is the Keebler ® company and come-on, how many Pecan Sandies and Danish Wedding Cookies can ya stand?

Frosty the Snowman seems to have survived for now and is living in the walk in freezer at a This Can't Be Yogurt ®  just outside Dubuque, IA.  There was a brief fear he was going to change his name to Aquafina ® the Water boy.  But Lydia James, a 37 year old Barista - still living with her parents, stepped up and put her job on the line saying she could not stand the thought of his lump of coal eyeballs sinking to the bottom of a water cooler somewhere with his carrot nose and corn cob pipe floating on top.

Perhaps the biggest concern will be for Mrs. Claus who now finds herself at the age of one hundred and eight forced to sew Barbie ® sized jackets for the ever popular "Singing Hannah Montana Doll."  But what is she complaining about?  The current rate for sewing one of those jackets is 1 cent per dozen. (really)

But lets not talk about the losers.  The winners are of course the children.

And that is what Christmas is all about.  With Santa's exodus from the North Pole he no longer needs to worry about restrictions he once endured.   Toys will be brighter and more beautiful than ever this Christmas season with new higher tech lead paints once restricted in the North Pole facilities.

How else can Santa keep those Wal-Mart ® shelve stocked with X-Box, Furreal Friend's Remote control Ponies, and for the teenage Girl the Text Msg electronic Diary.

Santa and his elves just could not compete.  They have those kids working 19 hours a day.  They can sleep on the floor next to their assembly line post.  Elves wouldn't stand for that. (Although there have been vicious rumors circulating about the Keebler Company's work schedule)

One supporter of the move was heard to say, "  Those kids can work for a cup of rice a week.  Every Elf needs the occasional Nutter Butter.  Those Chinese kids don't need no stinkin' Nutter Butter.  Those shelves have to be stocked.  Have to.  It's Christmas. And if we have to whip the kids in China to make sure American kids have a good Christmas than By-God we will. Those Chinks aren't Christian and for that matter neither are the Elves.  They are Pagan.  They'll burn in hell anyway.  So what difference does it make?!  It's Christmas!  What would Wal-Mart ® be with out well stocked shelves?  There would be no Christmas!  "

And besides this is not Santa's first move.  His exile into isolation at the North Pole came when he was forced (again by the Americans) to move from his native Russia during the McCarthy era.  This won't even be Santa's first time living in a communist country.  Despite Washington Irving and The Saturday Evening Post's best efforts, he in fact remained in Russia well past the Boshvic Revolution and even through his courtship with Coca Cola in the 1930's.  Yes, that benevolent bearded pipe smoking man you see wistfully depicted in Coke Ads from the 30s was in fact a Commie.

There is a radical splinter group of Santa die hard do gooders (mostly housed in the left wing of the Catholic Church)  who maintain Santa's Move,  -- what with his big heart and stalwart  reputation --  believe his secret agenda is to transform the sweatshop environment.

However, the larger bodies with in most churches have joined the crusade this Christmas.   It seems that those Chinese children have a monopoly ® on the manufacture of Crucifixes and other religious items including the New Testament ® itself.  (really)

First it was all the American Flags, now the bible?

Some Protestant churches have joined in (at least in spirit) and are replacing actors in their Christmas Living Manger pageants with workers from Guatemala found hanging outside the home Depot.  Yes, this year the three wise men are actually named Rafael, Ricco and Carlos.  The good news is. . .  the baby Jesus?  His name really is Jesus. . . (Hey Zeus) . . . the two year old son of Mary and Juan of Corpus Christi, Texas.

As for the Crucifixes, even ones clearly marked "made in Italy" (leaving one to presume by tranquil monks) were in fact made in China in Sweatshops under deplorable conditions. (really)

So the next time you see a lawn lit with a plastic baby Jesus just ask,  "Where was Jesus Made?"

I Want The New Chandler CD!

I made the following two videos this month with footage I shot from Occupy Oakland.

I am working on a third for Hali Hammer and it will be out very soon.

click I want to See the new Video or paste http://youtu.be/ilExjbNj5HY
for Chris Chandler and Paul Benoit “One Percent/Ten Ton Shoes”

Friday, December 9th, 2011 8:00 PM
with Chris Chandler and Frankie Hernandez at Chris and Jen's home.
My former music partner will be in town and we decided to put on a show at Our house!
A house Concert
1095 E 33rd St
Oakland, CA 94610
phone: 240 476 4976
website: https://chrischandler.org
My old music partner is going to be in town on a tour of his own music and we decided we should do a show together.