The Muse and Whirled Retort January 2021 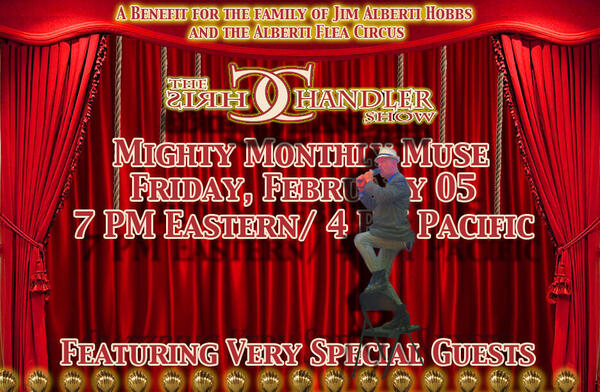 Hey, Everybody,
What a spectacular week!

Sorry this monthly news letter is a little late. I wanted to wait till today,
at this time on the first full day of a new administartion.

He whose name will no longer be uttered is gone!

Besides - I hit y'all a couple of extra times over the holidays.

Speaking of such, I haven't spoken to you since then, Thanks to all of you that watched the "Solstice Seasonal Spectacular" It was tons of fun. So much so - that we are going to be doing one every month - on the first Friday at 7 PM. Details are below in the Calendar.

Each one will be for a charity and this month it will be to both help the family of my mentor, Jim Albert Hobbs, and to get the flea circus he started to Oregon so that it can become part of a group that teaches children about Vaudeville and the Circus an continue its name and legacy, The Alberti Flea Circus.

There will be all kinds of special guests, I can't tell you who - but you know I know some good ones.

I continue doing the poem of the week. Now in 2021 we have moved to primetime and we now start Every Fridays at 7 PM Eastern!

Enough of the Crass Comercial announcements!

It feels like
the pimple of puberty has finally burst
and we can all feel the pressure wane
on this the first full day
of a new administration.

May the era where
adults
making adolescent allegations
return to the juvenile oblivion
from whence it came.

This morning,
a lighter air creeped in
through the crannies beneath my window sill,
the curtains drawn back
revealing a
polite
dusting of snow,
softening the hard angles of this long wintertide torrent.

But it is not just
the monumental changing of the guards
that the world has so long wanted
and now witnessed.

The fissures that divide this state,
this country,
this world,
have
(for a moment)
come a little closer together.

The world, for a moment, is a smaller place,
and a smaller planet means
both scientifically and poetically,
a lighter gravity.

It is hard to deny.

but deny they will.

But again, I say, may the era of allegations
introduced as evidence,
corroborated with nothing
return to the oblivion from whence it came.

The weight that has been lifted
is not the absence of some great orange meanie,
or the presence of some silver senior
having to step in to mediate between warring factions.

It is that there is an attempt at mediation.

An olive branch was worn by a pop star,
whose operatic oration declared,
"Our flag was still there."

The redneck in all of us,
removed our cowboy hats as we sang a song
written by a slave trader at the dawn of his epiphany.

"How sweet the sound,
That saved a wretch like me."

A skinny black girl,
descended from those very same slaves
and raised by a single mother
reminded us,
to "close the divide."

and as the divide closes,
the world becomes a smaller place, and a smaller planet,
both scientifically and poetically means a lighter gravity.


Gravity is a hard, unflinching empirical fact,
that guides the tides, while falsehoods flirt with floods.

Today,
a collective sigh of relief has been exhaled
into our own N-95 masks,
fogging our glasses,
leaving us dizzy
knowing
the high-water mark of hogwash
was the Y'all-Queda
attack on
democracy.

We saw falsehood
in the full light of day
dancing like the Grateful Dead,
gussied up in Maurice Sendak garb
complete with Viking Horns
and Tribal tattoos
chanting Q-Anon
fantasies.
A blizzard of bullshit
from atop the dais
in the senate chamber
of our soul.

From that vantage point,
we saw that the bar
set by the trump era was so low,
it resembled a trip wire.

Both Sides of the political divide finally agreed,
"Let the wild Trumpas end!"

But, being The United States of
"At least we are no longer Donald Trump"
is not enough.

Yes, our new leader has an imperfect record
and we can expect no less than an imperfect future.
But for now,
I will enjoy the lighter air,
as I float upon the balloon of hope,
and trust our new imperfect president believes what he said so perfectly,

If you would like to help me keep this show and newsletter alive (I have not done a live show with a live audience in over a year now) your contributions and or patronage will be greatly appreciated and put to good use.

or if you would kike to donate monthly (even a few bux a month would help me alot!)