The Muse and Whirled Retort March, 2006 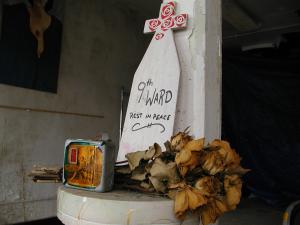 CHECK OUT CHANDLER'S VIDEOS AT CHRISVIDS.ORG

The exhibit serves as a reminder that until only very recently the bridge served as a military check point.

On this side of the bridge, it was only waste deep in water, but the other side, is a different story. But still, here, the plaster and lath must be removed on this side as well. I have been down here swinging a hammer in the hopes of getting this spot in the by-water reopened. It was here that one could get passes to cross the check point - often press passees printed and laminated in the gallery office, by any means necessary, in the hopes of getting actual residents in to assess their property. Also, it served as a key activist spot and independent media site in the early days of the worst manmade disaster this country has seen.

The moment I arrived, we crossed the bridge into the 9th ward, something I could not have done a week earlier without proper credentials. It is six months since the hurricane and you can now go into most of the ninth ward, St Bernard Parrish and New Orleans East. I went over with my friend Andrea, who runs the gallery and is one of the many unsung heroines in this debacle. We went to take pictures - the exact same pictures - she had taken 6 months earlier. Little has changed but the water level.

She pointed to a cheap plastic stereo system lying in the middle of the many impassable roads. She remembered it because she photographed it as it floated by six months ago - it's speakers sttill attached floating behind the larger unit like little dingys trolling the wake of a carnival cruise liner. And there it sits washed now ashore untouched as if it had been beached upon a deserted Island instead of the middle of a city street.

Whole houses block city streets. Over turned automobiles poke through piles of debris. Entire lives piled upon other lives in a giant potter's field for the positions of the poor. Framed photographs, children's toys, lawn mowers, kitchen sinks are ubiquitous. Doll's heads poking from Piles of dishes, sofas, and abandoned bio hazard suits. A white Ikea couch pokes from the driver's side window of an overturned Mack Truck on the corner of what was Reynes Westborn. Refrigerators sit on rooftops.

You see something like that, and you first you think, "How did that get there?"

"Oh, Refrigerators float. Houses do not," I get it. It floated there. Then you realize houses float too.

There was a barge that broke loose - ((for those of you who are not river people - a barge is about two city blocks long, or about half the size of one of the World Trade Center towers) and floated a few blocks from the canal taking out everything in it's path. It is slowly being cut apart and hauled away. It will be years before the big money interest will sort out just who failed to anchor the barge. It will be years after that that any of the home owners whose houses were run over by a barge will see a dime. Not to mention the residents are scattered from Key West to Anchorage. It is interesting - that it is the removal of the barge is the only sign of visible progress. Well, except for that coming from grass roots organizations.

Ya see, that's the thing - a strange synergy is forming between the hippies and the biible thumpers, and the locals. I have to admit as much as I identify with the poorest of the poor, I can't say they have ummm...ALWAYS identified with me.

In St Barnard Parrish (immediately east of the Ninth Ward) the tallest building is a giant geodesic dome. A colorful hand painted sign adorns the Neutral Ground that looks more like it should be pointing the way to a show at the Fillmore in 1969 than anything than anything that could be in St Bernard Parish, Louisiana before August of 2005.

Judge Perez Road winds past miles of destruction and standing in the middle of it is The Emergency Kitchen inspired by the Rainbow Family. There are no restaurants, no grocery stores, very little infrastructure, and until last week, no banks. Also, last week a Home Depot opened. The home Depot is also in a giant circus tent.

Fifteen-hundred meals a day are served from the Emergency Kitchen. They have showers and laundry. They have a "Free Store" from which Relief donations are distributed. There are "store managers" who sort and size truckloads of donations while living in tents and tee-pees There is a yoga tent and even a sewing room and an Internet cafe. There is nightly entertainment on a stage (musicians climbing over each other to get scheduled.) Hell, they have Movie Nights with a projection screen. There are pool tables in the doom. You should see the dread locked pechuli wearers rackin balls with the Dixie Sugar gimmie cap old spice wearers. Dr D and I were scheduled to perform there and while standing in the back of the food line, the doctor hears a child tell her father, "Daddy, the line is real long today, do you think they will have food for every one?" Needless to say, appetites were lost.

But, the cross cultural phenomenon is impressive and works in both directions. I am sure Chalmette residents will no longer cross the street when they see a face piercing, and it did not take long for the hippies to figure out they were going to have to learn to cook meat. And not unlike FEMA, the hippies should have figured out that Ash Wednesday is not the best day to serve pork.

FEMA's just another word for nothing left to lose.

FEMA chose March 1st (Ash Wednesday, the day after Mardi Gras) to kick evacuees out of hotel rooms. In case ya can't figure it out - it is pretty hard to get anything done on Ash Wednesday in New Orleans. Also, they choose the day to stop the public meal kitchens on the cruise-liners-turned-giant-relief-kitchens. It will be interesting to see how that effects the volunteer kitchens in StBP. Good thinking guys. I mean even George Bush, as he flew over that fateful August day he famously boasted he had partied in The City That Never Sleeps Alone. He's a former drug user - he ought to know and understand Mardi Gras. I mean, what use is it of have a former coke addict in The White House is he doesn't even understand Mardi Gras. Apparently even as a drunk George W is an amateur.

So, with these cuts - who is going to feed the people trying to rebuild the vast areas of the city where there still is no food, limited if any electricity and water? FEMA trailers that STILL have not arrived.

Well, that's the thing... The Red Cross and FEMA are coming to the hippies asking them HOW they do it. The Red Cross and FEMA are located up the street - housed in the StBP Convention Center parking lot and acres of adjacent land. It is a NASCAR, Indy Car, Merlfest triple Feature full of trailers. Each one brand new, costing more than 60 grand a piece - and these clowns can't come up with 300 hotdogs or MREs (meals Ready to Eat) a day. BTW, civilians are not allowed to live in FEMA trailers - government employees live in them.

But I have to say the trailers are a sight to behold next to the tee-pees. Construction workers and locals, volunteers, and even red cross workers come to the tee-pees to eat.

New Orleans officials have a storied history of corruption and waste - and rightfully so - but compared to what is co coming out of Washington, DC these guys are purse snatchers in a jail cell with bank robbers.

Further west in the heart of the 9th ward there is a blue house with a blue tarp roof. The Common Ground Collective - [link] - is one of the few residencies in my old neighborhood, and doing astonishing work. They are organizing volunteers to load dump trucks full of debris, they are helping the neighbors find the right agencies for assistance and teaching people what plants to grow. You have to understand, the soil, after an oil spill from Murphy Oil and years of an industrial canal (and all of the implications) having overlowed - the soil is dead. It is filled with arsenic. Sweet potatoes and other tubers have to be planted and their output discarded. It is dangerous, sad and desperate. They are doing terrific work, but, bless their souls, Common Ground is waste paper basket next to the landfill.

It was desperate before. Now it is apocalyptic. I can't think of a nice, uplifting, clever way to say it. Also, it is surreal. As if Revelations was written by Tom Robbins. Ya see, because it just opened up to traffic, and the Mardi Gras tourists are in town, the 9th Ward became a peculiar tourist destination".Let's see honey, Preservation Hall, Congo Square, St Louis Cathedral, and the Lower Ninth, then off to Bourbon."

I have never seen so many expensive cars in the lower ninth. Before Katrina, it was a dangerous place. Now there is no one, yet there are blocks and blocks and blocks of rich tourists stopping to take pictures. Well, not stopping, more like slowing down by houses lying on there sides, snapping a picture and driving on. This is the only place where I have ever actually witnessed murder (1998). I was afraid of this place 6 blocks from my house. Now during Mardi Gras 2006, Mercedes and SUVs with license plates from Ohio and Indiana festooned in purple green and gold beads came the apocalypse.

I only hope, that some of them will show their friends there pictures and it will inspire them to come back, get out of their cars and swing a hammer.

Well, if you ever had a hammer, now would be a good time.

Here is the slide show of the photos I took on my trip to New Orleans. http://chrisvids.org/pink_houses.html

It is in Windows Media Player now (which also plays on Mac) and will be in more formats shortly. Please tell your friends.