The Muse and Whirled Retort January 2007 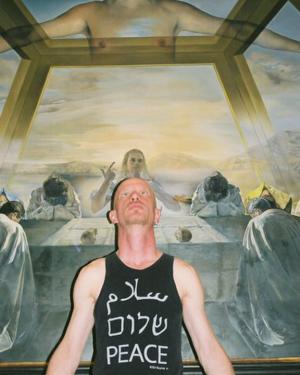 Today is January 1st and I, hungover, am headed to the studio in

Takoma Park to pick up the finished and mastered NEW CD, AMERICAN

We have been in the studio all month, creating another double CD with

fabulous special guests, bonus features, and of course includes all

If you would like to order an advance copy it would sure help a lot:

I have put up one of the new songs on myspace.  Give A Listen: Letters

We could still use your help making this CD.  Being in the studio is

expensive, and every hour we were in the studio is one we weren't at

the recording efforts, a donation of a hundred dollars will get you

in the liner notes.

Enough of the crass commercial announcements. Lets get to the news.

you help. Check the dates for details.

friend of mine gave to me from his son who was serving in Iraq.

Today is Sunday, January 19th.  I have been out at sea for three days

and I am starting to feel better.  The first two days I was

completely sick from seasickness and some virus.  I come out here out

everyday to the skin of the ship to write letters and whale watch,

which isn't great because I haven't seen any.

ship. I watch the horizon and sunset etc.  This seems so unreal to

360 degrees around me and seen nothing but water, clouds the sun  and

a fleet of battle ships surrounding me.

me for my mission.  I will also be training a short time in Kuwait.

This is hard for me to comprehend.  It seems like my whole life has

changed in an instant. Yesterday, I was in a classroom learning about

trigonometry and history. I graduated and volunteered for boot camp.

I went to school and graduated as a grunt.  I was sent across the

country to train, and now I am being sent across the world to fight.

Today, I am in a classroom learning about tactical urban combat and

nuke, bio, and chemical welfare in the middle of the Pacific Ocean on

my way to experience first hand what I am learning in the class room.

I am not afraid of dying, but I am afraid of what will happen to

those that I love if something happens to me.

desert- in full combat gear — ready to carry out my mission —

Sheila and taking care of my family,  and although I think about this

it doesn't mean I am sad about the choices I have made.  It

doesn't mean that by wondering why I didn't make the other

I had made to other decision — I am not a proud Marine. Just because

I wonder "what if,"  it doesn't mean I am not proud of what I am

fighting for my country still proud to be participating in Operation

hour for it to get there by Tuesday or Wednesday.  I would love to

keep writing but I really have to go.

I love you both very much,

And here is another letter.

This one is from Sgt. Jimmy C Gary and it is dated Tuesday, May 31

during the battalion's attack on the old city of Najif. As the

platoon attacked to clear a 4 story hotel, it was heavily engaged by

risk to make sure the members of his team were safe.

After fearless exchanging fire with enemy snipers for more than 3

through the rooms to inspect the marines defensive positions.

This is all the information I have at this time.

We are looking for dates in Northern, CA, Southern, CA

See below for details

Yes, The album is done and at the manufacturer. You can pick up your advance copy at https://chrischandler.org/index.php?page=notes

We are still looking for some dates in Texas and southern, CA and Arizona and Louisiana!

THE DOCTOR IS IN

Now we bid farewell to 2006, no big whoop. No big revelations. War

drags on. Chandler and I tour. New Orleans languishes. Mardi Gras was

I work as a stagehand for the Martin Luther King Memorial

Ladies, The Cheetah Girls and other notable events. Thanks Pat Barnes

and Co. for the work. I helped produce a children's album for Nick

and Joanne NicoloWhimsey.com/, and an album of gospel tinged brass

hope. You can hear Letters at  Letters   . Hope to see you out there

on the open road as Chandler and I head west.

Hear our MP3s, view videos and maybe become a "friend" on  MySpace

Home of Chuck and Joanne Narad

With Adam and Kris

ANYONE IN NORTHERN, CA?

In short we need SERIOUS HELP in Texas

Home of John and Regina Fierke

From the Bywater to the Quarters

WE Need a date between Chapel Hill and Washington, DC!!!!

See you on the open road