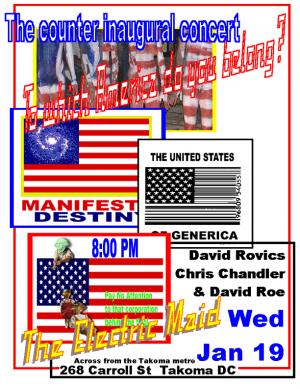 Happy Holidays Everybody! Hey, if ya wanna give Chandler or Feeney CDs as a gift this season just click here

Need to unsubscribe from the newsletter? We'll miss you, but it's easy just click here

By: Chris Chandler with apologies to Phil Rockstroh*

Hey  everybody, it's that time of the month again...  First, let me say Happy Holidays and let's hope we have a much better new year!  I mean, what a way to start the last month of the year.  Record deficits, Social Security insecure, the economy and the environment in the abyss,  Holy War IV being led by a preppy born with a silver

spoon in his nose and what are American voters calling the number one threat to the world?... gay marriage.

So what I wanna know is why can't these "moral values" folks stop thinking about other people's genitalia?

Usually that's how we define a pervert: someone who can't keep their mind off sex sex sex.

But, that's all these guys think about.  Hell, I had to quit going to church just so I could stop hearing about sex all the time.

out of my pants.

Stop thinking about it - after all - we could never get married.

You guys could walk past a hungry, uneducated child, drive across a polluted city, invade sovereign countries, lie about the reasons you were going to do it, bomb innocent civilians, lie about how many of them you killed and not miss a beat saying,  "All the world's problems are caused because somebody was thinking too much and too often about someone else's genitalia."

For once, you're right.  Those people are you.

You really should start thinking of something else.  There is a war on, for Christ's Sake!

Maybe if you just did it more and thought about it less you'd stop being so obsessed with the subject.

There are real problems out there - none of which have to do with my desire to sleep with whoever I wanna sleep with.  And trust me, that someone is NOT gonna be you - so stop worrying about it.

Now Jerry Falwell, I'm touched that you are laying awake at night thinking of me (and probably touching your self) but would you please try and say nicer things about me during the day.

HA, art resembles life - and in this corporate culture - according to you - it is marketplace consumers that define our way of life.  There is hardly a product on the shelves and cupboards  of every red blooded Presbyterian household on every red block of every red county of every red state in America that is not being peddled via sex sex

No, it is not your neighbors' lifestyle that is destroying the moral makeup of this country - it is you.

So stop telling me how to live - and stop buying the products being sold to us by the merger of Madison avenue and the New Orleans red light district.

It is not your neighbor - it is your corporation - that is to blame.

You want to improve the so called moral fiber of this country?  Let's have an amendment to the constitution banning corporations -- not gay marriage.

But to tell you the truth - I don't mind sexy ads - in fact I like them better than the products they puff.  Because, ya see - like it or not - all the universe really thinks about eon after eon is: Sex sex sex.

It ridiculous - you guys should propose an amendment against trees for dropping pollen on my car windshield and in my sinus cavities.

And it turns out human beings aren't the only homosexuals, don't ya know?

Of the 53 penguins in the Central Park Zoo  in New York City there are four pairs of homosexual penguins. In an effort to increase breeding, zookeepers tried to separate them by force. They failed.  Only one of the eight bonded with a female. The rest went back to same-sex relationships.

We should propose an amendment banning penguins.

Of course - they are in New York City.   We should have an amendment banning New York City - hell I'd support it if it meant we wouldn't be looking at Giuliani in '08.  But I digress.

Since homosexuality is natural doesn't it naturally follow that we should have an amendment banning all of nature itself - well, now that I think about it, we already do -- it's called George Bush's environmental policy.

I can just hear the debates on the senate floor - in a last ditch effort to save themselves the birds and the bees and the flowers and the trees begin to turn on each other.

"So tell me Mr. Poplar were you in deed openly fornicating in the Park?  In front of Children?"

"No Senator Hatch, it wasn't our idea. It wasn't my fault"

"We swear by our roots branches, and leaves that we were victims... the victims of  bees we were just standing there."

"It was those bees. All they think about is our sweet little flowers! They are sneaky, persistent, aggressive.... They're probably

"The sun!  He just watched -- the old voyeur -- while he warmed my tender new leaves. Let's have an amendment banning him! It is rumored after all that the sun itself was formed by the big bang a sort of cosmic one night stand!  The sun is probably a queer too ya know -

notice - he doesn't have a partner - that we "know" of  - he just hangs out up there calling attention to himself - the flamer.  The moon won't even be seen in the same sky with him."

Yes, all the universe seems to think about is sex, sex, sex, and, ya know, it was God that created the flowering earth and the salacious, sensuous stars, and you and me, George W Bush.  Since every red state and every blue state is indeed located in... the universe. We too think about: Sex. Sex. Sex.

So on judgment day, I will take my chances because I feel The Creator, who is a bit of a scamp Himself,  will be much more tolerant of those of us, who have erred on the side of Eros -- rather than those who have slept with hypocrisy in the pursuit of power.