The Muse and Whirled Retort September 2004 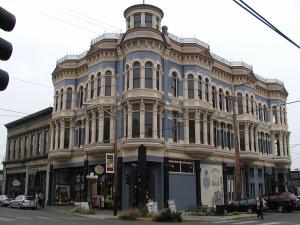 By Chris Chandler and Anne Feeney

Hey everybody, it's that time of the month again.

Can we count the ways that is insulting?  To every one BUT John Kerry.

At least the conventions have been good for creative drinking games.

This time we drew little slips of paper from a hat.  With phrases like "September 11," or "every time the crowd chants, 'USA USA USA'" and "anytime the camera pans to the one African American wearing a cowboy hat."  The person who got the drunkest was the one who drew the readed, "any time the crowd starts doing 'the wave' shouting 'flip flop flip flop.'"

Just think of the small children in Taipei working overtime to crank out all those pairs of flip flops.

The thing about flip-flopping that gets me is the fact that the man trumpeting the charge the loudest is the great turn coat himself - Zell Miller!?  This is a guy I once voted for governor!  He gave the key note for both Bill Clinton and George W Bush. And this is the guy they roll out to cry "Flip Flop Flip Flop."  As a Georgian I resent this!   The more people change the more they remain - insane.

As for the accuracy of your charges, Zell, it's like Albert Einstein said, "If the facts don't fit the theory, change the facts."

Personally, I don't understand all the cries of flip flop - Jeeze anyone who has been in office as long as Kerry should have changed his mind a few times.  Come-on - this attack is coming from a guy who first held office in 1995.  I like people who change their minds.  Well, now that I think about it maybe I don't.  OK, yes, I do.

George has not held office long enough to have his handlers tell him to change his mind. And Yes, I respect a man who joins the service, goes over - begins to put two and two together and says - "NO, I WAS WRONG!"

George and Dick had no chance to change their minds about the Vietnam War - because the only question in their mind was which is the best way to get out of it. Dick Cheney and George W Bush  attacking a war hero for HIS service record.

Talk about the pot calling the kettle an African American.

We couldn't take it.  Anne and I decided to visit the kinder gentler land to the north.  Made sense to me.  As much as we would like to be among the thousands being arrested for walking down the sidewalk - it just reminded me too much of the mid 90's in New York when 'Ghoul-e-ani,' would have you arrested for not possessing an ATM card.  Now, that he's 'Sir Rudy' all ya gotta do is hum the words to a David Rovics song and it's off to the slammer whether you posses an ATM card or not.

I miss the days when Arnold Schwarzeneggar was a forgotten action figure (like Big Jim with Kung-Fu grip, or Action Jackson or Major Matt Mason.)  Dick Cheney was laying pipe lines in his head and Liddy Dole was merely the recipient of her husband's Viagra royalties.

Our country is deeply divided.  The walls around the gated communities are higher and the security scrutiny required to land even the most menial jobs from the rich is more invasive than ever. Neal Bush's Mexican cleaning lady has to bend over for a cavity search to show what's up her butt before she can clean HIS toilet.   BTW why haven't we seen Neal at the convention. Anyone remember Billy Carter or Roger Clinton?

One sees the divisions everywhere.  In architecture and ideals.  Composition and what passes for compassion.

Earlier this month I found myself in the fair city of Winston-Salem, NC. Her downtown - which was built largely in the late nineties into the twenties while largely abandoned remains gorgeous in its decay.  The only place we found open to have drinks in was beautiful 1910 building - the bartender told us that the land lord didn't even charge them rent - only a percentage of profits in the hopes that the bar would stay.  Some business is better than none.  Most of downtown is host to for rent signs, check-cashing joints and store-front windows covered in plywood. Even the pawn shops have gone out of business.

While the Armageddon ambiance does have a foreboding feel, you can't help feel the remaining beauty still breathing in the buildings.  It's bonneted cupolas and Palladian windows flanked by pilasters and framed by marble dentals - leave one at least feeling there is potential to restore.  The foundation is still there.

The source of the vacuum downtown is much like it is all over America: the republican suburbs just suck so hard.  Much of Winston Salem was ringed in Reagan's go-go 80's by strip malls - which are now also largely abandoned - but abandoned strip malls do not hold up well.

I found myself on one of those four lanes highways that continue to connect the vacant strip malls.  There was an ancient goofy golf course busy returning to its natural state.  Giraffes and elephants stood peeking their plastic heads from the encroaching forest.  The republican elephant looks natural smirking in its decaying surroundings.  As if he were saying, I'm still standing tall and doing fine - who cares about the cracked sidewalks and rotting windmill.

Anne and I found ourselves in another one of those parking lots that blanket the United States of Generica - divided islands, slanted parking spaces and freshly painted asphalt - the ones that take up more land area than the Home Depots, Fuddrucker's and Cellular One shops that they are supposed to service.

As I was pulling out of a parking lot on to a main thoroughfare. A passing driver flipped me the bird. A couple car horns blared.  Tires were squealing.  News of the Republican National Convention was screaming on the radio. Then Anne shouts, "Chandler! You just drove through two enormous signs that said DO NOT ENTER--- what were you thinking?"

I replied in all seriousness, "I wasn't entering, I was exiting."

I hear the very valid complaints about John Kerry and I think - I don't care. We are not entering the Kerry years as much as we are exiting the Bush years.  I worry about a guy who would let George W Bush attack HIS service record.  Jeeze, the guy can't duck a punch.

We just put up the "Vote in November" CD at CDBaby http://www.cdbaby.com/cd/voteinnovember ... We're thrilled to be on this terrific Waterbug anthology of Anti-Bush songs ... along with Dan Bern, Steve Gillette, Anais Mitchell, Andrew Calhoun, Les Barker, Jon Byrd and more... Pick it up (it's an amazing bargain!) and pass it on to your undecided friends.

Anne and Chris are doing a few Midwest dates with Dan Bern in St Louis, Louisville, and Dayton. The swing state section of the "Anyone But Bush Tour" Also Chandler will be doing a west cost tour with Dan Bern in October. Chris and new music partner Joanna Smith are doing their second mid Atlantic tour!  Anne and Chris have lots of dates together through February particularly around the mid Atlantic. Check below for details!