The Muse and Whirled Retort August 2004 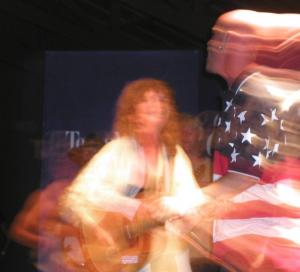 To buy our CD "Live from the Wholly Stolen Empire," click:

with a little luck it'll be done by the time you get this - let me know ifing it works!

FLYING POETRY CIRCUS headed to:  Seattle north to Cumberland, BC, south through Portland to Eugene, OR (many stops in between)...Pittsburgh on Labor Day!... on to eastern PA - Bethlehem, Phillie, Kennett Sq - numerous stops around the Beltway ...

by Chris Chandler and Anne Feeney

Hey everybody, it's that time of the month again!

The dawg days of August are barking. The city of DC is empty (so what's new.) She is much like New Orleans in that regard - I guess

everyone goes to cooler climates for summer vacation. But not me - I head uh... south.

Anne and I are taking a couple of days between trips to the west coast.

Our last trip with Oliver Steck was a blast! He is unsurpassed as a player, comedian, and real

life road warrior - the best sideman ever! Ahhh, I will miss him rolling across the stage - and

stage diving at house concerts. But it was great to be - albeit for a brief period - Chandler Anne and Ollie.

I know a bunch of you are wondering if we were at the DNC in Boston or going to be in New York for the RNC. Well, the short answer is "no".

Yea, we got some offers to play - but it seems everybody is looking for a political act that works for free. It is certainly not money that motivates us to keep this act rolling down a VERY different campaign trail.

But sometimes, I do ask myself, 'Why do I do this?'

Life - where you find your answers in the strangest places... Like the time I found my virginity on the internet. Ok - It wasn't MY virginity - and I only went to that website because I had misread the Spam.

Or even more unlikely than the internet - I found my answer watching the DNC. I watched it from a tiny TV in DC. One with rabbit ears encased in tin foil and poorer reception than Al Gore. I must say I did enjoy watching it. Me and my friends formed a little drinking game

where every time John Edwards gave us that stupid Fonzie thumbs up you had to take a shot. Needless to slur we little got all a drunk.

Thank God we didn't play the game as originally suggested - you had to take one every time democrat used the word "stronger" Jeeze... I'd still be drunk.

Nonetheless - it was on that tiny TV that I may have found my answer. Between shots, I found myself listening closely to Al Sharpton's speech - which was difficult to do if you were watching on network TV - with the rabbit ears and all - because every coupla seconds Sam Donaldson or

Ted Koppel or somebody would try to sound important - and I couldn't help thinking - "Hey, get your own election."

In fact none of the major stations ran his speech uninterrupted -- they had to keep saying, "uh-oh - he's off message!" - "he's off script - we don't know what's gonna happen." - Oh my God someone who can speak off the top of his head. Quick - cut to commercial - he's

liable to go all Janet Jackson on us!

Well, I got online the next day and found his speech and I'd like to share a sweet little section from his speech - because I think it gives me some arrows towards some of my answers.

Rev Sharpton said, "As you know, I live in New York. I was there September 11th when that

despicable act of terrorism happened. A few days after, I had to do a radio show. When I got there, my friend James Entome said, 'Reverend, we're going to stop at a certain hour and play a song, synchronized with 990 other stations. We're dedicating it to the victims of

"I said, 'What song are you playing?'" He said, 'America the Beautiful.'" The particular station I was at played the rendition of the song by Ray Charles.

"As you know, we lost Ray a few weeks ago, but I sat there that morning and listened to Ray sing through those speakers, 'Oh beautiful for spacious skies, for amber waves of grain, for purple mountains' majesty above the fruited plain' -- It occurred to me as I heard Ray singing, that Ray wasn't singing about what he knew,

Which is exactly why Anne and I drive past amber waves of grain, over purple mountain majesties, why we fly through spacious skies, above the fruited plain just to  play on picket lines and at demonstrations. People pouring their hearts and souls into their communities and families - not

for purposes of a capital gain - but because it is the right thing to do and it makes us a great nation in spite of the horrific deeds others do in our name. Our greatness is there - even when it is not apparent. These days it seems so far from apparent we may need to occasionally be

My love for this country is like the moon - not because it comes and it goes, but because it is there when it does not show.

Everyday, out on the road I see the hard work that many of you are doing out there and know you do it out of faith and principle, conviction and ideals. But these times are so absurd that both sides of this deeply divided country have lost their sense of absurdity. And if there is anything that is truly ridiculous is a humorless people in

Andrew Boyd (aka Phil T. Rich) and his cohorts are performing marvelous mischief with the "Billionaires for Bush" campaign. The "Billionaires" travel to whereever our appointed leader is speaking and dress as costumed billionaires with names like Hiram Overseas. They thank the Bush supporters for paying taxes so they don't have to. You get the set up - use your imagination for the rest.

But in Pittsburgh yesterday, a Bush supporter pushing a baby carriage started screaming "You assholes!" before physically tearing the sign out of one of the costumed "Billionaires for Bush."  How's that

for 'family values'?  I hope the baby was napping!

But it's not just the Bush fans who have lost their sense of humor.  Across the street a dreadlocked anarchist shouted the billionaires down with a bullhorn - just as the TV crews were picking up on the joke.

Barry Crimmins was asked "if you don't love this country - why don't you leave it?" He quipped,"because I don't want to be victimized by its foreign policy."

I say America, America, shed your grace - NO, OUR GRACE - on thee! And crown thy good with brotherhood from the Atlantic Ocean to the Persian freaking Gulf.

Sure sometimes I see only Mount Office Depot, rivers of asphalt, the great rapids of the Mighty Pennsylvania Turnpike and the concrete glaciers of middle America

cutting a swath through to the fruited plains faster, deeper and more permanent than any ice age.

Sometimes I think if the universe could think (which I am agnostic enough to believe it just might)the world might think of today as its dark years - The Human Years. Does the world look forward to another ice age - so it can get rid of us - shed us like a bad case of lice? Do other worlds look at our world and think `Oh, poor earth - she's

going through her human years.'

It winds from Chicago to LA

more than three thousand malls along the way...

Get your kicks on Route six-six-six...

A Wallmart in St Louie

But other times I roam and I ramble and follow my footsteps down the ribbon of highway I see above me an endless skyway and I see below me a golden valley... ...And it reminds me that life is sweet - unless you don't want it to be - and as any good southerner who has ever ordered

iced tea knows: for that you gotta make a special request.