The Muse and Whirled Retort July 2004 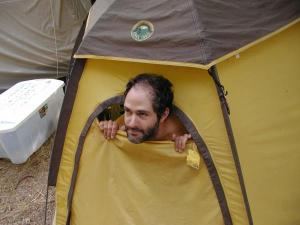 for past issues of the Whirled Retort click here

To buy our CD Live from the Wholly Stolen Empire:click here

Hey everybody, it's that time of the month again.  I decided to send

band mate of mine Oliver Steck  (The band Avoiding Godot). He is our

secret weapon of mass dysfunction.   If ya know him you ya know why

leg.  He is simply the world's greatest accordion player, trumpet

places.  Me, I flew in from Pittsburgh after driving there  from DC

to cram three weeks of camping gear, microphones and CDs into two

suitcases that pass the homeland security act.  It was has been quite

But not as much as simply piloting the Pennsylvania Turnpike.  Sheez -

construction zone successfully. It should be a negative toll.   I at

least feel like my insurance company should give me a discount.

"Let's see, Mr. Chandler, I see you have a good driving record, not

wanted for any felonies, managed to drive over a million miles

without a ticket - however, have you ever  driven on the Pennsylvania

from the floor. Ed McMahon knocks at the door - carrying a gecko. I

just got a great deal on auto insurance.

driving through a Christmas display of fireflies.

They were everywhere!  Harder to avoid than the deer.

public opinion and driving through a psychedelic light show that

appropriate.   Now bear with me here a second -

poking the tin lid with an ice pick.

As my childhood memories of fireflies flashed before me so were

Some lightning bugs continue to glow as they smeared across the glass.

I remembered as a kid watching them die inside the mayonnaise jar.

I think back to the last time I was in Pittsburgh back in March.  Out

of wrought, I walked down to my favorite little Irish bar to sit and

scribble silently  until I have hallucinations of being Dylan Thomas.

But on this -  St Patrick's Day weekend -   my sweet little retreat

has hired of all things a Karaoke DJ.  A sign on the door announces

that "ladies drink for free."

flickers.  They do this in the hopes of attracting a female.

I think about the poor virgins that hit my windshield.

blink in unison  in hopes that their combined brilliance will pierce

At the bar in Pittsburgh, barflies are garnished in blinking green

shamrocks and unbearable green paper hats, yet I cannot break from my

own tradition.  After all, I came here to write and this is what is

happening. I order a green beer, accept my own blinking shamrock, and

find the only open table.

Familiar acoustic guitar chords leak from the sound system as the

I wonder, what do fireflies think as they enliven their luminous

bodies, captive in a world beyond their own making??  Do they dream

they slide down the glass?? I get into an argument with  a

they should pick themselves up by their bootstraps.

rhythm all his  own.

ubiquitous.  "On a dark desert highway - Cool wind in my hair..."

Other lightning bugs announce their presence - one - then the other -

in the distance I saw a shimmering light..."

California." Once-hollow eyes gleam like fireflies piercing a once

pick up his tab singing, "We haven't had that spirit here since 1969."

tribulations.  I think of the armies of others working in solidarity

lyrics inscribed upon our psyche by the tattoo needles of elevators,

pull ourselves up by our own bootstraps is to get us to bend over.

Christmas lights -- dazzling in harmony, blinking as one - while a

spewing  "The poor should pull themselves up by their bootstraps."

The whole bar sings together.  "There is plenty of room here at the

pop song has captured the zeitgeist of my generation; too wrapped up

in the beauty, danger, tragedy, magnificence and irony of the group

Cigarette lighters slice open the darkness, like fireflies which take

controlled.  We, like fireflies, are greater as a collective, as a

whole - as a union - than we could ever be alone.

I, as a child, unlock the mayonnaise jar prison and the captive

The song ends. The applause erupts - spontaneous cacophony which

fire.  Its pace quickens.  Soon everyone in the room is clapping in

Darkness descends as one by one each solitary sparkle is extinguished.

But in that darkness a new generation of fireflies is created....

My friends, if we are to take down this administration, we all need

to link arms, burn like fireflies and try to avoiding hitting the

front windshield of the oncoming truck!