The Muse and Whirled Retort February 2004 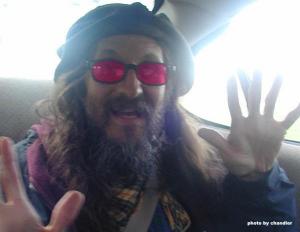 Brian QTN in Eugene OR

It's that time of the month again. You go to South Carolina in February in an election year and you'd think you were still in D.C.  It's the only time of year you when we see the rich so desperate to shake hands with the poor.  (John Kerry washed his hands afterward - but that's a different story)   It's nice to be a little farther south - it is cold in our nation's capital!

It's so cold you have to put things in the refrigerator to thaw them out (rim shot please). That's why Feeney and Chandler are headed to... (cymbal crash  please) Canada!

Most people think of winter as merely a frozen period. The poets draw metaphors of death - the withering away of life, moving on from the autumn years into your inevitable demise. Damn poets! Damn the poets, full steam ahead! Why do they do that?

I mean yes, it is winter and yes, I did turn forty this month, but it was also in the winter that I turned six. When I turned thirty I shaved my head for the first time. At forty, I have just shaved it for the last time (really). This way, whenever someone shows me a picture of myself - like when I'm old or something - I will have hard evidence as to which decade it was taken. And besides, in the decade since I first shaved my head every poseur in America has now shaved his. Montel Williams, Michael Stipe, G Gordon Liddy, Jessie "The Body Formerly Known as Governor" Ventura, that big guy from American Idol...

Growing up in Georgia, I always wished it would snow more, because snow makes your weed-infested junkyard look just as nice as your Presbyterian neighbor's manicured fescue. And as my favorite poet, e.e. cummings, said, "The snow doesn't give a soft white damn whom it touches." I always liked that about winter.

Winter is something you can feel in your bones. It makes us aware of our skeletal structure as it strips the trees of summer, allowing us to behold the bones of the earth. We see her landscapes without her gaudy gardenias and great green summer trees, her trendy autumn scarves, or her whorey spring negligees of tulips and bumblebees.

We see the earth naked - as we see our lover the next morning. Make-up kissed away. The low slant of winter's morning light reveals the angles of her jaw line. Down comforters and a sluggish sunrise let us stay in bed a little longer as we look within.

Some creatures hibernate. For them, winter is gone in a flash - but it is the cold of winter that gives them the strength to make it through the rest of the coldhearted year.

Last month I started with a George Santayana quote, so let me use another now: "To be interested in the changing seasons is a happier state of mind than to be hopelessly in love with spring."

Perhaps there is a reason that so many people could not start a conversation with a stranger if it were not for the weather. God bless the winter, for it is both an end and a beginning. It is something that brings us to praise the hard yellow warmth of chimneys, gather in tighter circles to hear the tales of the harsher seasons - until the snow melts, when we can venture out into the severity of spring armed with fresh vim to conquer the oncoming year.

And what a year it is going to be to conquer! The primaries, the general election, and most important: getting Forest W. Gump and his gang of thugs in suits out of office! If you are not registered, let me make it easy for you. Click here: https://www.workingforchange.com

Yes, what a year it is going to be to conquer! Anne and I will be taking some time off after our Florida tour. Anne is having some surgery, which will require her to take some recovery time. On March 18, she will have a growth excised from her right lung. We hope all these years of raising her voice have left her with oversized lungs so that she'll hardly miss the lobe that they plan to remove. We will be canceling some dates in the Midwest - though we don't yet know how many and which ones. You can send personal well-wishes by replying to this newsletter.