The Muse and Whirled Retort March 2004 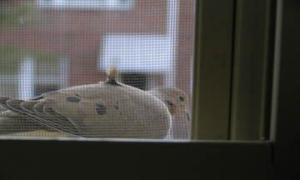 These are all places I have been in the past, ohh, 72 hours. (really) My sweet Chevy pick-up truck now sits, lonesome and forlorn in a creepy auto shop run by inbreds who must be related to the turnpike commissioner... they have the exclusive right to tow any vehicles-in-distress from the turnpike - then charge $15 a day storage. She needs a new engine!  My truck doesn't have health care either.  Couple all of this craziness with the roller coaster of pending life and death surgery of my music partner and one begins to develop a sense of place in this life on the road.

But hey, if life were easy - everybody would be having one.

So let me actually begin this newsletter where I usually begin...

Hey everybody, it's that time of the month again. Sorry I am late getting this out but it is leap year after all - and I guess I got a little carried away with the notion... if this were the 33rd of February (as it *should* be!) I would be right on time!

But there are not 33 days in February - she has been robbed from more times than the Safeway health care plan.

Poor February - she gets no respect... For example when Augustus Caesar rose to power he was jealous that Julius "July like a Dog" Caesar got his own month named after HIM. so Augustus changed the name of the

month formerly known as "Shemp" to you guessed it... August.  But then he found out July had 31 days in it, he stole a day from poor old February to keep pace with the Caesars.

No - he couldn't take a day from some month his own size.  And besides - everyone went along with this idea because there were intelligence reports at the time that February had weapons of mass destruction hidden somewhere near Valentines day.  People bought it and now - we have this tiny little short month that no one respects and is so snubbed it  even has to be called black history month - can't be spending too many days learning about the folks that gave us.... well... civilization.

Anyway, I am digressing here...  you may notice that I am writing about February when it is in fact March.  But I can't write about March yet - it hasn't happened yet - well this year anyway...

It is a leap year and the fact that human beings have even figured out how to have them is remarkable enough... Hell, February 29th cost poor old Roger Bacon his life back in the unlucky 13th  century.   (which also had a Friday the 13th BTW) He noticed that a year had a little less than the 365 and ¼ days that the Pope had said.

People claimed the Pope was short changing them.  Their lives were shorter than they had originally thought. There were riots because someone claimed the leader of the "free world" could be wrong about something.  The claim cost him his life.  The claim was true.  That could never happen now.

Everything about this leap year is remarkable...  It's the great leap forward in the year of the monkey.  We had a Friday the 13th this month, too.  Usually when that happens in February ya get a Friday the 13th in March too - but not this year.

This marvel only happens once every 28 years.  Dog knows how often it happens in the year of the monkey - I think it only happens as often as the children of the ultra elite get drafted.  This could be our year.  One thing is for sure though: change is afoot - give it a hand.  .

I mean not only are we going to boot Forest W Gump - the man born with a silver spoon in his nose - out of office but along with him: Joesph W McAshcroft, Colin W. Mc Namara, and Condaleeza W. Theron.

With a little luck, Kenneth W Lay will be wearing matching orange jumps suits with  Dick W Cheney and being served bread and water, pleasingly presented on a stylish  stainless steel tray by Martha W Stewart.

Or maybe, Li'l W will have to make up for his lost military service - by personally manning a checkpoint in Tikrit.

Good things do happen - But we do have to wish them to be so.  So thank you for dreaming with me folks.

This is not just a leap year it is a leap year in the year of the monkey.  So, John Kerry may choose Lloyd Bentsen as a running mate - he could win anyway.  Really.  I have just cast my absentee ballot in the Florida primary - Dennis just might win his first... OK, that's a bit of a stretch...

But think about it - amazing things do happen.

If she had listened to her surgeon - she would have had a lobe of her lung removed back in January.  But no - she wanted to make one more trip around the country to see all of you.  And apparently all of you wanted her to keep coming back.  Like leap year.  Someone like Anne comes round as rarely as leap year in the year of the monkey.

I am thankful to have been her musical partner during the Bush years.  Personally, I look forward to retiring our Bush repertoire come November.

Till then...  Those of you praying for miracles may now direct your prayers to the upcoming election!