The Muse and Whirled Retort January 2008 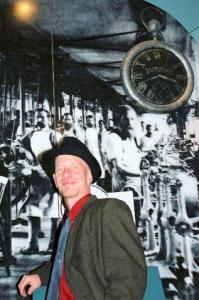 Thanks so much for reading my little monthly missive. Sorry it is a little late. Each January " as I have for the past 8 or 9 year (at least since I have had e-mail) - I try to look back at the year that just left us like a distant traffic light in a rearview mirror.

Sometimes ya gotta look back. Personally, I think the future looks bright, if only because the past is so dark.

The year started off with Apple's introduction of the iPhone to assure that not only do we work 80 hours a week " but we can now carry our little work station home with us so we can work to and from work as well. Hell, we can work all the time. I am working right now!

Those of you who had placed your hopes for humanity on our ability to redefine ourselves when we begin to colonize outer space had your hopes thwarted when Jerry Springer aired his first episode in outer space called "Astronauts Gone Wild." The star of the show was U.S. Navy Capt. Lisa Nowak an astronaut caught in an outer space trailer trash love triangle.

She drove 900 miles on earth, wearing a space diaper so she wouldn't have to stop and pee. I was thinking " where can I get one of those? One small step for man, one giant leap to the trailer park. It makes sense to me, that space station is about the size of a good double wide.

"Think about what they see lookin down on us, all the space junk orbiting around our front yard: rocket parts, Satellites sittin up on blocks while we suck down malt Liquor, smoke generic cigarettes and gossip bitterly about our inbred, dumbshit relations in our under-privileged world…" (from Vinegar by Phil Rockstroh and Chris Chandler)
http://philrockstroh.com/

Viacom sued Google and You-Tube for a billion dollars claiming they were not being paid for use of their material. After settling the suit they still refuse to settle with the writers of that same material.

The writers are on strike, in the middle of campaign season? No witty one liners from the talk sow hosts. It is not a fear of some Iowan Emily Post distaste for negative campaigning that has given the major candidates a pass on scrutiny. It is the writers' strike.

Red necks across the country were relieved to find that the perpetrator of the Virginia Tech Massacre was not an inbred psychopath named Tiny who grew up in the trailer park shooting coke cans with a submachine gun yelling "Immigrants who ain't learned English should be shot."

Instead it was a South Korean English Major named Seung-Hui Cho who, even though he had been repeatedly diagnosed as mentally unsound, was still able to purchase his weapons legally thus justifying the NRAs slogan, "Every Waiting Period's Gotta End Sometime."

Profit reports showed Wal-Mart had already put all independently owned retailers out of business and needed to find a new group to put out of business in order to stay viable.

It announced it would begin putting health clinics in nearly 500 stores. Private practice family physicians close up shop. Soon, The Wal-Mart condominiums open on a trial basis in three key markets. Renters of the condos will be able to work off their rent by working as stock boys and greeters and buy bread and water at the company store (Wal-Mart). The only hitch in this plan is that the Wal-Mart jobs will not pay for the Wal-Mart for visits to the Wal-Mart Health Clinic, so residents desiring any form of health care are forced to take a second job at Wal-Mart's only known competitor: Sam's Club.

England's Tony Blair announced he would be stepping down because of the vastly unpopular war in Iraq. It is unclear as to weather Saddam Hussein or George W Bush should be credited for toppling another government. In true Blair fashion he side-stepped the issue saying that stepping down would free him to spend more time in the White House. After 6 years having his nose rubbed in it, he is now properly house broken and can spend more time humping bush's leg.

CNN announced that it would break the writers' strike by having you " the people " ask Democratic presidential debate questions on You Tube. Questioners included a snow man, a minister and a third level avatar from the game Halo.

Candidates receiving questions were a good looking black man, a blonde white chick and some white dude try to shake their seedy backgrounds and bring law and order to a violent world.

The end reulst of the debate was that none of the three would make a good president but were the perfect cast for a remake of the 70's TV show The Mod Squad.

The GOP announced it would hold a similar debate in September. The Mayor, The Minister and The Mormon, now known as The God Squad will take on the democrats in competing TV adventure series.

Your honor, think of Johnny Cash
And Elvis and Hank Williams too
Whatever it took to go get those songs
Those good old boys would do
If it's illegal, then throw out Blonde on Blonde
And every Beatles song since Hard Day's Night
Go ahead and burn Walt Whitman
Unpaint Starry Night
Coltrane, Louis Armstrong, let 'em burn
Kerouac, Thelonious Monk
Alice in Wonderland, Picasso
Burroughs, Blake, Ginsberg, throw it out, it's junk
Then throw out all your favorite records
Throw your books of poetry away
Close the museums, burn the paintings
Restore us to Galileo's Day
Then to the drug store we will go
For Vicodin and Chloraseptic spray
Scarf a couple Darvocets and Xanax
And then we'll go floating away

On the anniversary of 9-11 Osama Bin Laden released a video again taking credit for the attacks. Bill Maher says, "How is it that we're supposed to be terrified of Bin Laden's awesome power... I mean, the guy is still using VHS for god's sake!" -- but I digress...

In this video Bin Laden appeared with darker hair, all the grey gone from his beard and looking years younger leading to speculation that he may be taking steroids and an Asterisk now appears beside his record of largest terrorist attack in US history.

Descendants of the Wounded Knee attack continue to dispute the record regardless of steroid accusations.

Al Gore wins Nobel Peace Prize for his work on global Warming. This prompted a rash of lawsuits. In an astonishing reversal, the US Supreme court awarded the Peace Prize to George W Bush.

World leaders voiced outrage at the assassination on Thursday of Pakistan's opposition leader Benazir Bhutto and expressed fears for the fate of the nuclear-armed state.

Pervez Musharraf says he wants the fullest possible investigation of the killing of Benazir Bhutto and has offered to dispatch all the witnesses to Guantanamo.


Yes, My friends the future does indeed look bright if only because the past looks so dark.
So as you look to the new year remember that you can not add light to this world by adding more darkness.

Or (from "A Funny Thing Happened on the Way to the Abyss" By Phil Rockstroh and Chris Chandler) It always gets darkest just before it goes completely black.

****************
I have been taking a " well, comparatively speaking - break this month. December had me in Atlanta, Philly, Connecticut, Boston and DC with Paul Benoit. Our shows have been going well! We plan to do a little NW swing at the top of February and could use some help on dates. If you would like to out this show in your home or venue please drop us a line. There are lots of dates available!

May of 2008 will be my 20th anniveresry. I plan to keep going through this festival season and the next. I am considering a farewell tour in the summer of 09. 20 years, can you believe it.

Clearly we need some help here from folks in the NW to make this work.
I have a few other irons in the fire but YES is SOOOO much better than maybe.

In fact, NO is better than maybe, really….