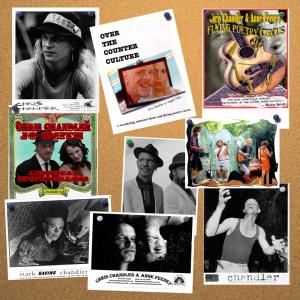 Some of the acts from the past 20 years

You didn't need me or this little news letter to tell you that.  I just like saying it out loud – because May of 2008 is my 20th anniversary of being a performer.

I have thoroughly enjoyed telling stories for the past twenty years!


Anyway, I often say we are in it for the long haul – and sometimes you see a mile marker and ya gottat point it out.  Once upon a time I lived in Victoria, BC just up the street from Mile Marker Zero on the world's longest highway – The Trans Canada.  So here is my milestone: I am putting out a box set to commemorate the event.  50 songs from 20 years.
Check it out at:  https://chrischandler.org/index.php?page=notes

Believe me preorders would sure help!  Please click on the announcements section for more info on that. Or if you are already convinced click here:
https://www.paypal.com/cgi-bin/webscr

Yes, 20 years ago I graduated from the North Carolina School of the Arts in May of 2008 as a stage lighting designer and special effects major.  At the time, I had this idea…

… I would pay for a trip around the country to audition as a lighting designer by… well… reading poetry on street corners, of course.

See, it's not as weird as you think.  OK maybe it is – my poor mother!  Anyway, I had these monologues because in college I had written some plays.  Now ya gotta picture this… Me at 23 years old – skinny, long blonde hair, dressed like an art student – complete with beret and black turtle neck sweater doing monologues in the parking lot of the Pall Mall Shopping Mall in Winston Salem, NC.  OK Needless to say my career was not off to a glorious start.

Now this was before cell phones – and in those days you avoided the guy standing in a parking lot flailing his arms about talking to himself. These days you assume he is on the phone – you may even be mildly jealous that the homeless guy has a smaller, less noticeable Blue Tooth device than you do.

So, I did as any thinking man would do – I bought a guitar.  Now, I did not know how to play the guitar – but just holding one – and strumming lightly while muting the strings as I read the collected works of Lawrence Ferlinghetti poems aloud.  That made me a folk singer.

I did manage to get me enough money to put enough gas in my car to get from city to city to go audition as a lighting designer.

In New York (where I am right now) I managed to get a job as an assistant LD on Broadway.  However, I was having so much fun performing in the Subways of the big Apple that I turned it down.  At the time I convinced myself that it was just for the summer.

OK, its twenty years later and I am still on my summer away from college.

Sure, I have had some near misses over the years.  Like when I was 25 and Atlantic Records took an interest in me.  Really.  So much so I got invited down to Rockefeller Center – I got to tell the door man that I had an appointment. He looked on a clip board and indeed I did! It was very intimidating – they had me come in to this conference room  - and a bunch of guys in suits sat around it with me sitting there worried if I had put enough money in the meter. They had listened to two or three demos and were interested in a song called "Watergate Generation." The thing I remember was a life sized Cut out of Keith Richards (I am NOT making this up.)  They proceeded to play the song – on cassette in a boom box.  They decided that I was too old.  At 25!

In reality I am sure it was a good thing.  I have known several people in my life to get major record deals – and I swear it shortened their career.

Hell, It would be easy to be on the road for twenty years if you were famous. Doing one night stands, adoring idiot fans, staying in hotel rooms, hot showers, meals.  Try it when you're playing for 9 people passing the hat in a coffee house in North Dakota while crashing on the floor of an alcoholic in public housing.

There are lots of things along the way I could be bitter about but I am not.

Close calls, brushes with fame, near misses and lots of bounced checks.

I have come to realize that life is short, cruel and unfair. But the good news is – it is equally unfair to everybody.  So, the next time you start feeling like life is being particularly unfair to you – its not.  Cos the truth is – you are just not that special.

You are nothing.  Just like me.  But don't get me wrong.  I'm no atheist.  More of a God fearing agnostic.

So yes, even though we are irrelevant keep praying. I am so cynical I am actually optimistic.  It's important. It can make you feel special if only to yourself.  And being special – isn't that what we all want out of this life?

So, once you realize that – don't go getting all fundamentalist on us.  Personally, I hate fundamentalists of all kinds, including atheists.

I actually like that we have "In God we Trust" on our currency.  I didn't use to,    I used to rail against it. Now, I think its funny.  George Washington was an atheist and we all carry pictures of him around in our pockets that say "In God We Trust."

But what about Australia?  Are they under God too?  Are they further under God than we are?  Or if not – wouldn't we then be one nation over God?

They're are atheists out there – ya know – that wont capitalize "god."  I don't get it.  I mean even if you don't believe in God.. Don't you still capitalize it? I mean don't you capitalize Huckleberry Finn?

I believe in the Easter Bunny.

I believe in Santa Claus.

I believe that the power of good is greater than that of evil – but not by very much.

I believe in the Buddha, Allah, Vishnu, Jesus Christ.

I believe in Peanut Butter.

I believe that children have imaginary friends, and that adults really can't see them,

Perhaps that's why I believe in condoms

Isn't that what God is to some adults?

And what's wrong with that?  It's real to that person – very real.  Just don't try to make me see it.  Oh, sure tell me about it,  But don't make me try to see it,  Don't make me lie about having seen it.

Hmmmm,,, I will lie to you and myself about knowing YOUR imaginary friend so that I can find the path of righteousness.

I don't mind the notion of a path to righteousness.  Perhaps that path is this very highway.

I am not making this up…  Once, in 2002, while on the road, I was in Miami and I saw an image of the Virgin Mary on a telephone pole.  I did.  It was stain on a metal power line in down town Miami.  I pointed it out to another.  People began gathering around – the were genuflecting.  Right there.

Now, buddy, that's power.  That is something to believe in.  To tell stories about.

I believe that every picture tells a thousand stories and every story paints a thousand pictures (you do the math.)

That is why I have thoroughly enjoyed telling stories and now making videos for the past twenty years!

Thanks for your help along the way!

It is to be called Fifty from Twenty.  Fifty songs on 4 CDs   a DVD for 50 bucks.  The songs come from the 13 CDs I have put out as well as a few from the ten tapes I put out before that.  There is a complete list of songs at https://chrischandler.org/index.php?page=cds&category=01--2008&display=540.

It will be an interactive CD ROM with lot of special features including lyrics and photos.  Karen Kilroy is putting that part of it together – it is very cool!

All in a handsome package complete with a booklet.

You could get it on a flash drive!  Yes I am releasing them all on flash drive
It too will come in a handsome package – with the videos in a flash drive format and the songs on MP3 for easy loading on to your iPod.

If you would like to contribute a hundred bucks or more to this worthwhile endeavor I will put your name in the liner notes as an executive producer.

Or click here: https://www.paypal.com/cgi-bin/webscr
*******************
The West coast tour with Paul Benoit
We have lots of dates to fill in Especially in Northern California!

If you would like to bring us in to your home for a house concert or know of a venue suitable for this unique and highly entertaining and informative show please drop me a line.

We start at the High Sierra Festival Near Reno - July 4th weekend Then Up and Down from Victoria to San Francisco and back.  See dates for details.

***************
After the west coast I still have a pipe dream about making it to England with Paul but hopes and dreams are beginning to evaporate.  I am looking for leads – still.

Anyone out there help?

I am working on a new music video of George Mann.  You can see the last one I did for him at http://www.youtube.com/user/baldchandler
***************
I am flying to Texas at the beginning of June to shoot video for the new play with my friend Wendy Corn.

I hope top spend a few days at Kerrville.

As well as shooting video in West Texas with Wendy Corn.
I have a few needs here!

I am flying in and will have no tent.
I need to borrow a pick up truck for about 24 hours to ride in the back and shoot video of the open road West of Kerrville.

I have a Pro-Sumer One Chip mini DV camera.  If you will be at the festival and have any thing better and would like to help on this project I would love to hear from you!

We nee dates in northern California or Southern Oregon VERY BADLY here!
Arcada, Eurika, Willits, Redway, Ashland – you out there?

We need dates in Southern Oregon or Northern California Right here!
Arcada, Eurika, Willits, Redway, Ashland – you out there?

Takoma, Olympia, Port Townsend You out there?