The Muse and Whirled Retort July 2008 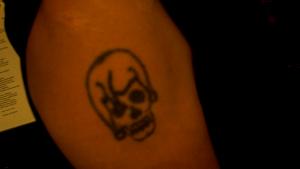 The Box Set is here! The Box Set is here! Yes the 20th Anniverery Box set is in my hot little hands!  It is a four CD/ 1 DVD featuring highlights from each of the 13 CDs I have released over the last 20 years – Also a few selections from some of the Cassete tapes (remember cassettes) That I released in the days before CDs existed.  "50 from 20"
50 songs from 20 years on the road.  It is very exciting.  Click here to order your copy now!

Paul Benoit and I start this 20th Anniversary tour at the High Sierra Music Festival this weekend.  Because I have been so busy with family matters we still have some big holes in our calendar.  If you are on the west coast and would like us to come play at your house, party or Bar Mitzvah please drop me a line.

As I was driving through Wyoming my GPS stopped working and it… it… made me mad.

As you know I am celebrating my 20th year on the road this summer, and I remembered my first trip through rural Wyoming.  I was just starting to book gigs and I HAD to make a phone call to New York City.  I was trying to book one of my first "Big" gigs. I was going to open for Earl Robinson who had written the music to "I dreamed I saw Joe Hill Las Night."  In order to get the gig I needed to call at a specific time.  Well, I could not find a phone.  ANYWHERE.  Exit signs on the US highway said things like "NO SERVICES, NO PHONE."

When I finally found one it was literally a single phone booth in the middle of nowhere, surrounded by giant rocks and a sky as big as Canada.  There were a couple of cars parked and a line of people waiting to use it. There was a bench to wait on.  It was like a scene form the old Maxwell Smart show. (The original – not the wretched remake.  Will Hollywood stop trying to turn the past into something it was not.  Hey, I have an idea – lets do Get Smart with out Mel Brooks – but I digress…)

Just 20 years ago big swaths of the country did not even have pay phones.  These days you can't find pay phones for very different reasons.

Oh, how we love to reminisce the good old days – the ones that never were.

The days that we tattoo on our psyches, maybe even our bodies to remember a particular moment in life.  I remember as a kid, there was a guy in my elementary school with a tattoo.  He was the only one.  I was probably in the 3rd or 4th grade – he was a couple of years older.  It was actually the first tattoo I had ever really scene close up.  It was a skull with a jester's cap.  I was afraid of him. His name was Grey.  Yea, I was afraid of him, yet wanted to be like him.  He played guitar and quoted Tolken.  He was the biggest freak in my elementary school.

A skull with a jester's cap.  Today such an image might even be ubiquitous, But then, it  was well before I knew anything about the Grateful Dead.  The image disturbed me for years. I thought about what do you want your legacy to be?  A skull with a Jester's Cap.  What could be better?  Living your life making people laugh. And when you die – your still doing it.

The tattoo grew in scope in my head.  It became elaborate, decorated bejeweled - magnificent.  When ever I saw a tattoo, it was always paled in comparison to my memory of the one I had seen as a child.

I spent most of this last month in Atlanta. As I have mentioned in the "personal section" of this newsletter, my mother has not been doing well.  So I spent most of June taking care of her.

One night by brother took over and I went visit one of my friends from high-school. Low and behold who was at the party but Grey. The boy with the tattoo.  WOW.  I told him bout my memory of him in elementary school and how often I thought about him, that tattoo, and the whole notion of going through life with a Jesters cap.  The fool, the wandering minstrel, the vagabond became my icon.  Hell, I even drank Falstaff Beer at one point in my life.

I managed to talk him into taking his shirt off so I could see it.  And there it was in all its - reality.  It looked like a prison tattoo.  Thin pale blue lines sagging from aging flesh.  He said he had done it him self with a sewing needle and a ball point pen and was considering getting it removed.  In the early 70s there were not a lot of tattoo parlors – especially ones that an eleven year old could get one.  And knowing Grey, if tattoos were as common as they are now he would probably not have gotten one.

While I was down there I managed to catch a stomach virus.  HOLY COW!  I haven't been sick in forever.  I was throwing up, sweating.  Sick as a dog, at my mother's house.  I was lying in bed watching down the hall.  And there she was.  With her walker, struggling down the hall. Carrying a bowl of chicken noodle soup. Yes, she brought me chicken noodle soup, with crackers.  Saltines.  She put a thermometer in my mouth - one of those old school glass ones with the silver mercury that takes a degree in higher mathematics to figure out how to read what degree it says.  It was the same one she had placed in my mouth as a child. A hundred and five degrees.  She struggled to lean over – clutching to the walker to wipe my fore head with a cool wash cloth.

I had come home to help take care of her, but how the tables turn.  She found strength from my illness.  It was the only time in my life I was glad to be sick.  I knew.  I know.  It will be the last time my mother will… will… mother me.

That's the muse and Whirled Retort this month.  Have a good day and don't forget to write your mother and tell her you love her.

Jim Hinde's music and lyrics to all his songs: www.jimhinde.com

To hear streams of his songs: www.cdbaby.com (type "Jim Hinde" in the search field)

With Pike Place Market as his stage, street musician Jim Hinde delighted millions of visitors, locals and workers for two decades with poignant lyrics, understated guitar and a nod, smile or wink that said: "What's not to love here?"

An institution within an institution, Mr. Hinde was the soul of a place considered the soul of the city, his folk songs a soundtrack for the Market since he began performing there full time as a busker in 1990.

The death of Mr. Hinde, 56, who suffered a heart attack in his sleep, cast a pall Tuesday over the Market, where he was regarded as a consummate professional. A former salesman, Mr. Hinde often credited the Market with saving him from the demons that haunted him as a Vietnam War veteran.

His image — gray beard, brimmed hat and guitar — was the subject of who knows how many tourist photographs.
***************
Paul and I are looking for dates in July and August and I need something to get me back across the country in Mid August.
***************
The Box Set!  Fifty from Twenty.  Check it out at http://cdbaby.com/all/chrischandler
***************
T.H.A.N.K. .Y.O.U.!
Karen, Alan, Claire, Chandler, Kathleen Murray, Kevin Chandler, Frank and Dorothy Chandler, Paul Benoit, Anne Feeney, Shirley Myers, Michelle Sellers, Wendy Corn, Dalis Allen, Tim Mason, Brian QTN, Doug and Jena Gesseman, Eddie Owen, JP Strong,  SONiA, Courtney, XFS, The Kerrville Folk Festival, NW Media, Jason Carpenter.

I Have Nothing HERE!
Anyone in Northern, CA?