The Muse and WHirled Retort March 2008 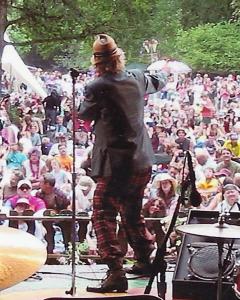 Hey Everybody,
It's that time of the month again! Lot of changes here in Chandler-land.
First of all the new format for this news letter.  If you are having trouble with it please click www.chrischandler.org and read it there.  Since it is a new format – please OH please drop me a line and say what you think.

I know I know – you just want to read the new piece and don't care about any of the personal crap OK So, I'll get to it.  But in the new format – You can read the announcements and such – (or "personal crap") with the side bar.

So… the new piece this month will be a monologue from the play I am working on.

From "…And I Ain't Gonna Be Treated this A-Way."
A new one man play in progress
By Chris Chandler

In this scene I am driving and have just picked up a hitch-hiker.

So, where ya headed?

"Austin."  Of  course…  Dunno why I asked.  I mean you're standing on the side of the road with your thumb in the air holding a sign that tells me exactly where your headed. "Austin."  And I have to ask.

Sometimes I wish we all walked through this life holding a sign that announces where we are headed.

I guess now that I think about it, we do kinda carry one that announces where we've been – ya just gotta know how to read it.  But that's a different story,

Yea, it's a GPS.   Whoda thunk that ten years ago?  A global positioning satellite in my car.  Heh, I like its like carrying a sign that announces where I am.

So, now that we know where we are, and where we're headed I guess the only remaining question is: Where ya coming from?

I like it out in New Mexico.  That's where they filmed The Road Runner Cartoons.

Huh? The music?  Oh, its satellite radio.  I like it out here in the middle of nowhere.  Though, I think its funny…. They call it Sirius.  Named after The Dog Star – Sirius.  The brightest star in the sky --  'Least it used to be.

Now the brightest star in the sky is the Nortel Satellite.

The very thing that the "Sirius" Satellite is named from has been given second class status by… well, The Sirius Satellite itself.  One of nature's greatest feats has been replaced by something manmade.  Like a ski lift to the top of Mt Everest or Barry Bonds beating Hank Aaron's homerun record.

Oh sure they named the company "Sirius" after its --  casualty  -- to "honor" it I suppose -- but it kinda feels like naming your sports team "The Washington Redskins,"  or your subdivision "Nez Perce Estates,"  or your town "Taos," or your state "Dakota," or your method of traveling across the high plains in search of Buffalo Wings a  "Winnebago," or the bank you financed it all with "Shawmut."

The only thing I know about that is there aren't too many Redskins that could afford to go to a Redskins game or drive a brand new Jeep Cherokee.

Next to the Sun and the Moon - nothing in the sky has been written about more than that star.  The Egyptians based their calendar on when it.  They used it to predict if it would be a hot dry summer or cold winter or if the Nile would reward her with her fertile flooding.

Funny thing is I do too.  I use it for the weather channel.

I like this channel here.  The show's called "Disorder."  They play the best of everything regardless of what genre it is – as long as it's good.  Like you might hear Rachmaninoff played next to The Cramps, or Pubic Enemy played next to David Allen Coe.

You can't look at the stars and see a pattern like when you can look at the wallpaper in a Cracker Barrel where you see nothing but one big pattern that blurs in to  general lack of wonder.

The stars are indeed wallpaper – but they are God's wallpaper, and God doesn't shop at Home Depot.

Although he does occasionally hire Mexicans out of the Home Depot parking lot just to piss off John McCain.


Well, yea - you're right about part of that… Texas is big, but I don't think its ugly, In fact - I think it's beautiful – in its ummm… ugly perfection.  It has  so wholly achieved the zenith of ugliness – that it is in-fact flawless.  It is perfect – even if it is perfectly ugly – and you can't argue that perfection in and of it self – is not beautiful.  It's just kind of an acquired taste – like gin and tonic or the poetry of Rilke or the later films of Mel Brooks.

But I always say – you can't comment on the scenery unless take the trip.

Its like if you take a picture of any one place out here in the middle of nowhere – its ugly.  Tumble weeds and dust. Cacti and cattle.   But when you drive across it something cathartic starts to happen.  It's hypnotizing.  You see shit that's not really there.  Or is it there all the time and you have to drive for 14 hours straight to find it?

You drive from El Paso to Orange your whole perspective starts to shift. You see her as both vast… and tiny.

You see the barren bluffs and they seem to go on for ever – like this highway.  But then the moon rises, and some bug hits your windshield – just below the belt of Orion   And you look to Orion and you see the vastness of this landscape – our lives - as tiny.

Its like Horton hears a Hoo – only in reverse – and the elephant is traipsing around the universe trying to get everyone in the galaxy to shout at once "We are here! We are here!" So that we -- here on earth -- will know that heaven is out there too.

But the people here are too busy to notice.

She is so big.  And How could they?  They are surround by "big" every day of their lives.  People just can't imagine anything bigger. So they like to brag about it, cos people will brag about anything.  It may be the one constant in the universe.  While Orion stands up there looking down on you - and me -snickering beneath his celestial breath.

"You can drive all night and never leave home."

'Cos Orion knows all about that one constant in the universe.   People will brag about anything… When the state of Alaska was applying to get in the Union the people down here were complaining that Texas would no longer be the biggest state in the union. The people of Alaska said, "Oh quit your whining or we'll cut ourselves in half and you'll be the third largest state."

So, what kind of music do you play?  That's why I picked you up – the guitar case.

That's brilliant.  You just use the guitar case as a suit case 'cos people are more willing to pick up a guy with a guitar.  I guess it's true.  It worked for me.

I once bought a VW micro Bus in Nashville, only I was in Atlanta at the time and I had to get up there somehow.  So I went down to the thrift store and bought silly costume cowboy hat – gigant-toe – ten gallons hell! It was 10 oceans – and I stuffed my cowboy boots into my jeans – then I found this ridiculous white blazer with wide lapels – 70s type -- and I got a roll of electrical tape and made a big musical note on the lapel.  I carried an old beat up guitar and a card board sign that read "Nashville." And stuck my thumb in the air…

Le me tell ya – I got to Nashville faster than I could drive the microbus back to Atlanta.

I think I made it there in three rides, and I played the part for each one.  But I wasn't lying to them.  I mean, I wasn't headed to Nashville to get on the Grand Ol Opery or anything.  But they wanted to believe that.  I just let them.  It was easier for them to accept than I am a traveling performance artist.  Too hard to explain.  "Acclaimed by the crowded heads of Europe."

No, it's easier to fake some Hank Williams song in the front seat of a Bonneville for a stranger – and tell em I am a musician then try to explain me sittin of a stage with a video projector, pretending to drive while talking about being in the front seat of a Bonneville playing Hank Williams songs while truckling for some audience's approval in the same manner that I did when I was a child and I dipped my fingers into some mildly toxic Crayola brand soup and smeared it on a piece of news-print hoping my mother would scotch tape it to the turquoise refrigerator from which came the life giving forces of food.

But Hell, that's the reason most of us do anything – so we can consider ourselves as important as the grocery list or the phone number of the milk man.  Oh, to be held in place by a magnetic bottle opener on the Metropolitan Refrigerator of Art just ONE MORE TIME!  Dunno why I am so ashamed of it that I have to lie about my own motivations.

Your not really headed to Austin? Now, that's what I am talking about.  It is easier to just tell the passing traffic that your headed to Austin.  People can relate to that.  Who wants to pick someone up whose headed to Dripping Springs?  No ones ever heard of that – and Austin is close enough to what they need to know.

One time I was flying to a gig, and I had on this preacher outfit – so sure, I played the part.  The whole flight.  I had to switch flights in Detroit.  They asked me at the ticket counter, "Mr Chandler, what is your final destination."

I answered, "Well, heaven I hope."

GET YOUR REQUESTS IN EARLY!
There was a couple of days there when there was not a SINGLE show on my calendar.  Wowzers!
That kinda felt good!  Not to worry I am just taking a break as I approach my 20th anniversary of performing practically 24/7/365

I would really like to pick up two maybe three shows between right now and May 9th in the DC/Balto/Richmond/Philly Region if you have any idea please drop me a line.

Other than that I am taking some much needed and well deserved time off!


Paul Benoit and I will begin working together end of June/top off July
Paul is in El Salvador till then.

We are looking for shows anywhere from Santa Cruz, CA to Cortaney, BC

Paul and I are looking for shows in Europe!~
I have never been and would like to take this show there while George Bush is still president!

If you have any ideas please let me know.
August 20
England