The Muse and Whirled Retort June 2008 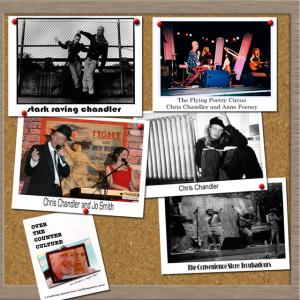 The New Box Set will be here any second now!

Hi Everybody,
It's that time of the month again.
It has been a rough month here in Chandler land:  The Kerrville Folk Festival, and lots of stuff in the life of my family.  The long and short of which is I am going to go into the archives and give you an old one.  Considering I am releasing my 20th Anniverery Box Set this month – it kind of feels appropriate. This one is on it performed in with Anne Feeney.  It was written six years ago this month in the post 9-11 daze.

And he plops down on the couch – flips on the war - like on NFL game day
– puts on a red white and blue Patriots jersey -- bowl of chips in his lap, George still grilling dove in the yard – Ozzie slammin an oil can down on the coffee table – shoutin, "USA USA USA" as the bombs begin to fall.


Barbara, baking cookies in a Martha Stewart apron.  Still feeling arrogant because she got HER picture on the one-dollar bill.

Is it any wonder why – in that region – as civilization was in its infancy
human beings wandering aimlessly through the desert – that they found their liberation their salvation, their hope – in a burning… Bush?

First, my mother is not doing well so I felt I needed to cancel much of June.  My apologies to those of you that were expecting shows from me.  Many thanks to those who have filled in for me.
As it stands right now I am going to be driving from Atlanta to home to Washington, DC and then across the country to meet Paul in Eugene, OR on July 1st.

It is a four CD and one DVD set.  It features songs from each of the thirteen CDs and many of the tapes I have released over the past 20 years.
FIFTY FROM TWENTY.

BUT WAIT THERE'S MORE!
The box set comes in a handsome package with a nice booklet complete with comments about each of the 50 numbers.


I still haven't gotten it back from the manufacturer yet – but should real soon!

It will be available at shows as well as www.cdbaby.com
The play is coming along and I am aiming at the fall of 09 to launch it.  It will have video scenery – and my friend Wendy Corn and I just went out to rural Texas and shot much of it.  It is looking very cool!  I am most excited about this project.  If you know of a theatre that would be interested in presenting a 2 act 1 man play please let me know.

I need a show somewhere in the middle of the country June 28 29 30
ANYONE HELP?