The Muse and WHirled Retort April 2009 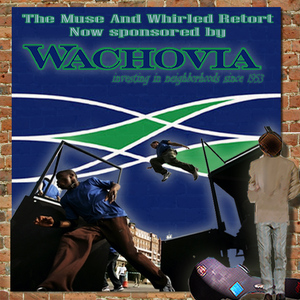 For those of you who don't know, In Barack Obama's  recent national town hall meeting, a question was asked to The President of the United States by – YES! Little ol me! I couldn't believe it either, I am still kind of in shock. But all the hype at home afterwards made it even wilder.

Can't I say I had a conversation with the President of the United States? Can't I have my little moment, just for a second? OK maybe not. It is pretty amazing how many people will contact you – just from one little blip on the national media.

Three different people went to my website and then telephoned me to ask if we were related because we had the same last name. Really.  One of them called at 2 AM in the morning!  I am going to have to remove my cell number from my website.
Well, that's the way I thought about it. It was cool. (except for that)  But then, I get an email to the chandler.org account from a company called Schwartz and Lowman who handle advertising for Wachovia Bank.  They liked the question too.

They want me to tell MY story in an ad.  "Wachovia, We're still the same bank."
They liked me -- Chris Chandler – taking his concerns to the president, and They want people to know that they too are listening.

It's cool – I read the first draft of the script day before yesterday. They liked the angle, of little ol broke nobody folk singer – trying to make a living and taking his little bits of money to his neighborhood bank and then the bank gets bought and sold.  So he manages to get on National Television to ask the president about his concerns. There is a shot of Wachovia executives watching in a big board room and then deciding to invest in a play ground at an inner city elementary school. WAY COOL!

I mean stranger things have happened.  But I can't think of any.  Wow what a weird two weeks!
Yes, I am still doing the tour in May with Danny Dolinger.  I don't think it is going to change that much – its just I will be able to make a bit more of a comfortable living for this one commercial.  YAY! To comfort.  But, don't worry.  I will still be keeping it on the road.  Speaking of such I will see you between the white lines!

Thursday April 30
NYC
Tribeca Y
TENTATIVE
with David Bryan
I hope to have some deets on this posted soon.
Please feel free to email me about this date.

Saturday, May 2nd, 2009 8:00 PM
Peace Groups on Long Island Present Chris Chandler and George Mann
the Unitarian Universalist Fellowship of Bellport
51 Browns Lane
Bellport, NY
phone: 212-923-6372
PRICE: $10.00
This will be a split bill with Geroge Mann and myself.


HELLO CONNECTICUT, WESTERN MASS!
YOU OUT THERE?
I WOULD LOVE TO PLAY SOMEWHERE ON THIS DATE!


Saturday, May 9th, 2009 8 PM
The First Spring Concert Ever!
Marshall Farm
RSVP .. ivymarsh@aol.com
Robbinsonville, NJ
Time to be announced, you are welcome to join us around 6 pm.

Sunday May 10th
I would really love to play somewhere on this date!
I have Danny in tow the show is rehearsed and ready to go.