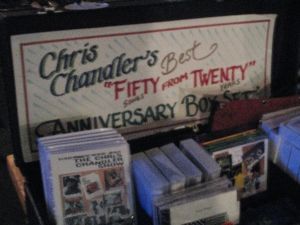 T.H.E. .M.U.S.E. .A.N.D.. .W.H.I.R.L.E.D. .R.E.T.O.R.T.
June 01, 2009
Vol. X Issue viii
Kerrville, TX
At the cajoling of friends I opened a "Twitter" account and have not looked at it since. However, I get these emails that say all these people are following me.  I have a sense of Orwellian doom. Then I go to a gig and think, "HEY! Where are all my followers?"  I have taken to reciting poetry in front of security cameras. I am developing a following of really bored security guards. Three of them bought my CD.

I get all of these requests on Facebook® to fill out surveys asking me to reveal "25 Things About Me Nobody Knows®" Hmmm I think, if I did that those 25 things would be no longer true.  Maybe you don't know them for a reason.  Maybe that reason is not all that insidious or mysterious maybe those 25 things just aren't all that exciting.  Danny Dolinger says, "Just because it happened to you doesn't make it interesting."

I stayed at a Motel 6® recently and got online (no longer free BTW). The next day I stayed at another motel and I got an ad on my Facebook® page from Motel 6® saying, "We want you back.® "

I say on Facebook® that I was born in 1913.  I get ads for "Love After 80®", Depends®, and last will and testament legal filing services.

We communicate a great deal through these one liners we post on social networking sites but not just to each other.  Just because I am paranoid doesn't mean they are NOT out to get me.  There just isn't all that much to get, so I am still here.

I really don't want to be King Leer, eyes gouged out, kneeling in the rain railing at the moon, or a rainbow warrior with no driver's license, bank account (or job) and whose children do not have social security numbers.
I do it.  I post a little one liner every day on face book.  I have to admit I enjoy the challenge.  Sometimes I think I may have lost contact with folks from 20 years ago for a reason.  Sometimes I think, "WOW! I really wish I kept up with that person" sometimes I think, "Why do I STILL keep up with that person?"  Mostly when I am on that thing, I don't think at all.

None the less, I have been so busy doing that that I am late for my monthly news letter and all I have is a bunch of one line Profile updates from a social networking site.  Here they are:

Chris Chandler retorts, "Time is not on my side it's on my back."

... is making folk music a threat again. (like Riot Folk)

... pictures an old movie style poster thwarting any attempt for public health care with a picture of three swordsmen as "The Free Marketeers and a caption reading "All for none and none for all."

... looks out his window and sees closed factories - moved to Bangladesh, and a homeless guy by the interstate, with a caption that reads: "American Idle."

...thinks "American Idol" is aptly named 'cause when we watch that crap America IS idle.

...was just thinking over half the population of Iraq and Afghanistan have never voted  but you would be hard pressed to find a single American who has never been to a McDonalds.
insists it be called "Obsessive Compulsive Order!"

... is driving for 5 hours to rehearse for 4 hours with Danny Dolinger.

... believes billboards form in first light shadows, inviting us all to focus on something other than the beauty that is already there.

... wonders since I was made in God's image does that mean I am immortal, eternal, omniscient?

...is singing Benedict Arnold with a happy meal / extra fries came with the deal / with our apple pie is in a cardboard box. / At the Taco Bell in Valley Forge / there were burrito supremes we could all afford / and tiny packets of mild alternative rock

... sees oncoming head lights parade by like sad clowns or full moons looking down on an awkward girl with a nervous laugh in a distant city.

... worked as a stage hand yesterday. The third oldest profession.

... is taking down the stage for Earth Day in the rain. Should I complain?
is singing, "Well, they say it's your Earth Day Well, It's my Earth Day too, yea."

... wonders why there is not free wiFi on our national mall?

... wonders if Monday is the first day of the week or is Sunday?

... is wondering if his room is cluttered or this is his own quirky aestheticism
was afraid of facing his fears so he turned his back on them and saw all of the hope and inspiration that trailed behind.

... is reading Aleksandr Pushkin while listening to Southern Culture on the Skids.

... has jumped off the wagon and boarded the Night Train.

... figures, if life were easy everybody would be having one.


************
OK OK that is enough.  I thank you all for reading my little monthly missive.  Feel free to pass it on to others and if you would like to subscribe I promise never to sell this list and to only bother you once a month.  You can do that by clicking here: https://chrischandler.org/index.php?page=signup

****************
Danny Dolinger and I had a wonderful trip to New England, New York, New Jersey.  WOW!  And then to Texas and my beloved Kerrville Folk Festival.  Danny and I might even have an act together  what do you think?

It was terrific to see all of you out there! HOLY COW, I miss that place.

****************
I am so looking forward to hitting the road with Paul Benoit.  He flies in from Paris this week and we play the Xtreme Folk Festival first http://www.xfsmusic.org/  then off to the west coast.
**************
Paul and I have several dates to fill especially in middle/northern California, Washington state and Oregon
*****************
I am punting on the trip to England in August, I just could not get the dates to justified the trip.  DANG.
****************
Danny Dolinger and I are thinking of a trip through Middle America in the fall ending up  in Columbus, GA for SOAW.  If you have any thoughts  now it the time.
*****************
The box set is doing well  and also there are now a few copies of some of my older titles at CD Baby. http://cdbaby.com/all/chrischandler
*****************
There is a possibility I will have the anthology of ten years of whirled retorts out this summer.  If any of you know a good place to get a (apx) 300 page book made please drop me a line
*****************
T.H.A.N.K. .Y.O.U.!
Shirley Myers, Danny Dolinger, Christina Wulf, Anne Feeney, Celene deLoach, David Byran, Phil and Angie, George Mann, Angelica, Kate Feeney, Mike Stein,Dan and Efrat Bolze, Geoff Bartley, Jim and Catherine, Pete Cassani, Ryk McIntyre, Jan Luby, Abby Thomson, Don White, Amy Malkof, Jon Svetkey, Brian Doser, Nikki Leeman, Chuck Yeager, All those wonderful wonderful folks in Willimantic CT, Courtney Malley and her wonderful family, Jim and Maggie, Lisa Beth, Dennis O' Brein, Ray and Kati, Christina's mom, Vern and Lenore, Dalis Allen, Tim Mason, Shannon Flattery, Ruby Luby, Brad, all the great folks at Camp Calm, Camp Stupid and Camp Cuisine, special shout out to Doug Gesaman, The Blue Hit, Amy Berlin, Sick and Raina, Raina Rose, Eric Schwartz, That Damned Band, Patty Peeples, Michelle Sellers Joe and Jay, EEQ, Pat Barnes, Seth Lamb, Karen and Alan Murray, Claire, Kevin, Frank and Dorothy Chandler and Wendy Corn.


I am going to be in Atlanta and Ashville in Late June
Anyone gotany ideas?

Then I am going to cross the country and looking for something to get in to between here and Seattle.

Wed and Thursday July 29, 30
Anyone in Olympia, Chehalis, Tacoma want to do a show?

Sunday August 9th
ANYONE IN BELLINGHAM?