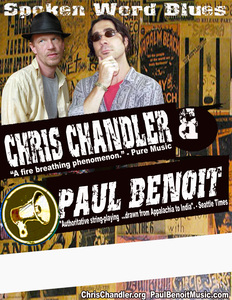 Hey everybody,
Its that time of the month again.  Sorry I am a little late – I have been rehearsing this new show with Paul Benoit.  I want to quickly tell you about this tour we are doing – if you are in Pensacola, New Orleans, Houston, South Padre Island, San Marcos, Austin, Dallas, Ft Worth, Atlanta, Ashville, Winston Salem, or Washington, DC please come on out – or send folks you know.  I promise it will be a great show.  It is ironic that I promise this because "promises" is the subject of this month's brief newsletter.

OK ENOUGH OF THAT:


It always seems the worst jobs in America inevitably go to a black man.

I feel for ya Mr President.  I do.  America has taken a beating for the past eight years.  She is broken.  I wouldn't want your job.  But, can you imagine how broken she would be if some of us had stopped fighting the previous administration?

We fought hard to keep America out of this war and when we failed to stop the invasion – we did not surrender – we kept fighting, and we can't stop now.  Your election was just part of this fight.  We did not hang a banner over the white house reading "Mission Accomplished." (OK we did… but that is a different story.)  Our fight is not over.  Nothing is accomplished.

So, even though we (not you) won this election and we (not us) danced in the streets of Washington, DC -- remember every dance is in celebration of a promise. Every boy and every girl leaning against a wall at every high school homecoming dance trembles with hope – and promise.

Just because some one picks you to slow dance does not mean you are getting lucky that night.

There are still American troops in Bagdad. The anti war movement in this country has never been stronger.  As evidence, I posit we had a revolutionary election based largely on the promise that they would come home. Do I trust you?  Do I believe you'll do it?

The answer to that does not matter – words like trust and belief won't do it.  Not until they ARE home.  Not until it IS closed.  Our voices should be louder than ever.  They must be.

The drum beat for peace must continue to echo through Lafayette Park regardless of who is in the White House.  The song goes on even if there is a new band leader.

Do I have hope?  It does not matter.

Hope is fickle and she flirts with betrayal.

Only complacency can crush rebellion.

Your election WAS revolutionary so, I'll say it again, only complacency can crush rebellion.

Without actions, words are promises.

Actions have a larger vocabulary than promises.  Just because you have issued a decree against torture does not mean we can't hold YOUR feet to the fire.

Even though every opinion poll shows the number of Americans against this war is higher than support for you, Mr President, fighter planes still fly over the star spangled banner as the world watches our Super bowl ®.  I know that we cannot change from being a testosterone laden bully, invading sovereign nations on false pretences overnight.

Change I can believe in?  Just because I believe in the Easter Bunny doesn't mean I expect to find marshmallow peeps in my picnic basket.

I want change.  I want you to bring them home.

I wish you the best of luck, Mr Obama. I voted for you. I was there on the mall for your inauguration.   I believe in you.  But just because I believe in Santa Claus doesn't mean I believe in Christmas.

If you think for one second we cannot hold you to your words I say to you,

**********************
Paul Benoit and I are playing a string of dates from New Orleans through Texas and back to DC.  Please come out and check out the show.  I will be debuting new material from the play I am working on tentatively titled "And I ain't gonna be treated this a-way."

Check it out at:  http://cdbaby.com/all/chrischandler

***********************
I am looking for a music partner for a string of dates from Maryland to Boston in May.  I would like to work with someone who has a strong repertoire (not another singer-songwriter that only knows how to play the dozen songs he or she wrote) and would be available in late April, early May.
*********************
Pauli and I  are looking to fill the summer now.  We are looking for dates on the west coast and in England in June, July and August.

********************
Paul Benoit has a brand new CD entitled Bluebird.  He recorded it in El Salvador over the past several months – I am here to tell you it is terrific.  He will be performing numbers from it on this tour and selling them at our shows and it will be at CD Baby soon.

Sunday and Monday
Anyone from Houston to Austin want to throw together a house concert?

Monday the 16th any one in New Orleans or Baton Rouge got any idea for a show – we are in town and free!


Thursday the 19th
Anyone in Athens, or around Atlanta got an idea for a show.
Greenville, SC? Perhaps.


Monday or Tuesday
Anyone from Winston Salem to Baltimore got an idea for a show?


Looking for dates – house concerts any where from DC to Boston.
Philly you out there?

May 1
The Botto House
Patterson NJ