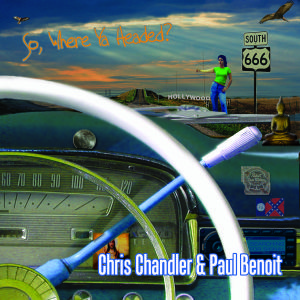 
Wait --- Wait --- Wait just a second here. We MUST have a sec for a rare but still important crass commercial announcement. It is from our sponsor ,um, me.

Ya see, it is done! The new CD is finished. It is named after the first thing ya say to a hitchhiker: "So, Where Ya Headed?"

It is fully recorded and mixed and wow, does it sound good. My best studio effort in years!

All due to Paul Benoit (www.paulbenoitmusic.com Paul-Benoit-Music). He is nothing short of a world class slide, roots and Americana guitar player living in Seattle, El Salvador and Paris. He both accompanies on and produced this new record, "So, Where Ya Headed?"

I am posting a song from it -- for a few days -- that seems to fit the theme of this newsletter at www.myspace.com/chrischandlerorg Listen-NOW!
If you would like to purchase an advance copy, I will send you a signed copy of the new CD for $20 bucks including postage.

The easiest way is via PayPal by clicking on the coffee can to your right
The other way is to send a check or money order to:

In either case, make sure you include your snail mail address and how you would like it signed.

And one more thing before we get to the featured newsletter: The tour. See tour dates if you are on the east coast from NYC around the peninsula of Florida all the way into Texas!

NOW, enough of the crass commercial announcement and on to…

It used to be the G-8, but they had to make it a higher number…well, because of inflation. Some people applaud the number because the say it makes the group (or gang) more inclusive.  But I know better.  It’s really because if they kept it at 8 they would have had to kick out the United States.  But, that is not the reason I want the number to get smaller.  I want one big – G.

Oddly, we are the only country in the G-20 with out health care.  If it were a meeting of the world’s best healthcare providers, we would have to have the G-250 in order to include the United States.

But what about the other 250 some odd countries?  Why weren’t they invited to participate in a conference on the world’s economic affairs?  We would have had to give them some time off – and we can’t have that!  They have cheap plastic crap to make.  Where would Wal-Mart be if we gave the third world some time off.?  And where would we be with out Wal-Mart?  The G-100?

Those peon third world nations are either rouges or slaves.  They are a lot like you and me, too busy paying finance fees and bounced check charges to ever get out of the sweat shop.

The majority of the world is out pickin’ cotton, a few tokens are happy to be workin' in the big house while a couple of fat cats are sitttin' on the front porch drinkin' mint juleps.

You put a bunch of wackos dressed like minute men in a town hall meeting, trying to protect the insurance corporations, and it is round-the-clock coverage, but you put thousands on the streets and you fire tear gas at them, and barely mention it on the news.  Sheeze, ya gotta go to Iran and march on the streets to get coverage on the news.

I played there with Anne Feeney for the release of Michael Moore's new Movie "Capitalism, A Love Story."  It's international debut was screened for free there.  I highly recommend it. www.CapitalismALoveStory.com

Sometimes I think we are all in a traffic jam on the highway to hell, honking our horns at the devil himself, and shouting, “Can’t we get a move on?”

We got half of us working a lousy construction job trying to widen the highway to hell, and the other half working on a more fuel efficient handbasket.

We got the Chinese offering us rope for sale and Bank of America is offering expensive knot tying classes for a small finance fee.

They have (literally) started charging a fee if you don’t make enough deposits in a month (regardless of your balance) and American Express has decided they can lower your credit limit if you start making purchases at the Dollar Store (really).

They are making record profits not in spite of the bad economy – but because of it.  Why is it our economy collapsed?  “Let’s find somebody that’s broke and then charge ‘em for it.”   It’s no wonder the banks have “failed.”  Bounced check charges, late fees, over the limit fees, ATM fees…. It’s like my friend Roger Manning used to say, “People work hard their whole lives, wind up with nothing.  Me, I ain’t got nothing.  At least I didn’t work hard for it.”

Now that everybody is broke, they have figured out new ways to take money from you with this bailout.  These CEOs with their golden parachutes… between you and me I wish they were real golden parachutes – like King Midas jumping out of a 727.

It’s ironic that the principle economic power at the G-20 is a communist country.  The capitalist countries are bailing the banks out with public money.  It’s the twentieth anniversary of the fall of the Berlin Wall – yet when our wall – Wall Street almost fell we rebuilt it stronger than ever while giving a hand job to the corpse of Khrushchev. But this turn of events ain't turning Khrushchev on.  That ain't a hard on that's rigor mortis.  Yet somehow we only wind up with the lousy parts of socialism.  WHERE’S MY HEALTH CARE?  I don’t want to own the banks. WHERE’S MY HEALTH CARE?  I don’t wanna own the car companies. WHERE’S MY HEALTH CARE?

Or how bout one big G?

Paul and I are planning a tour in October. If you are in
DC, NYC, Philly, Anywhere in MD or VA, Ashville, Winston-Salem, Charlotte, Atlanta, Savannah, Jacksonville, Tallahassee, De Land, Tampa, Miami, Gainesville, New Orleans, Baton Rouge, Houston, Dallas, Ft. Worth, Austin, San Marcos, San Antonio, we’ll be there. Can you help in any of these cities - or anywhere in between?

I am posting a song from it -- for a few days -- that seems to fit the theme of this news letter at Listen-Now!

The thing is, now I have to pay to have it to be manufactured, and you too can help!!! In fact, you can help by doing one of the following:

You can purchase an advance copy. I will send you a signed copy of the new CD for $20 bucks including postage.

The easiest way is by clicking the coffee can on your right.

The other option is to send a check or money order to:

In either case, make sure you include your snail mail address and how you would like it signed or your name listed.