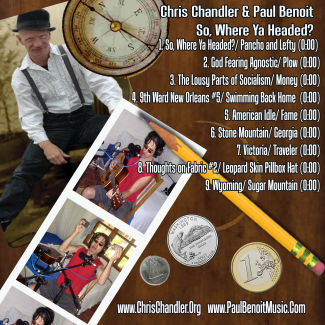 Wait --- Wait --- Wait just a second here.  We MUST have a sec for a rare but still important crass commercial announcement It is from our sponsor um me.

Ya see It is done!  The new CD is finished.  It is named after the first thing ya say to a hitch hiker:  "So, Where Ya Headed?"

Ya see The whole CD seems to be a conversation with a stranger about the road and the places it takes you.  Paul Benoit seems to play the part of an amazing radio station that just keeps picking the right tune.

It is fully recorded and mixed and wow does it sound good.  My best studio effort in years!

All due to Paul Benoit www.paulbenoitmusic.com.  He is nothing short of a world class slide, roots and Americana guitar player living in Seattle, El Salvador and Paris.  He both accompanies on and produced this new record.  "So, Where Ya Headed?"

The thing is, now I have to pay to have it to be manufactured, and you too can help!!!  by doing one of the following:

1) Purchase an advance copy. I will send you a signed copy of the new CD for $20 bucks including postage.

The other is to send a check or money order to:

In either case, make sure you include your snail mail address and how you would like it signed or your name listed.

And one more thing before we get to the featured newsletter: The tour  see tour dates if you are on the east coast from NYC around the peninsula of Florida all the way into Texas!

NOW, enough of the crass commercial announcement and on to.

Well, it's that time of the  ummm  year again

For the past 9 years, I have been sending out an additional "Muse and Whirled Retort" when the day, month and year are the same, such as February 2nd, 2002 etc. Four four four  was a particularly good one.

So it is that time again! Today is Nine Nine Nine.  Let us have a look at the number 9.

Ninety-nine bottles of beer on the wall

John wrote Revolution 9 and George wrote "Cloud 9."  When the remaining two were asked if there was any significance to the release date being 9-9-9, they answered in German: "nein."

I guess the most common reference is to 9 is a cat having nine lives  hence the Nine Lives brand of cat food.  I always thought that was an odd name for a brand of food.  Like their slogan, "Well it's not going to kill the cat."  But it may kill the K-9.

So where does it come from  the nine lives thing?

One theory on the origin of this expression is that in ancient times nine was a lucky number because it is the Trinity of Trinities. As cats seem able to escape injury time and time again, this lucky number seemed suited to the cat. While in most countries the cat is said to have nine lives, in Arab and Turkish proverbs, poor puss has a mere seven lucky lives, and in Russia is said to survive nine deaths.

In Europe, a fear of cats for some religious reason or other  I really dont quite get it  led to their mass slaughter  and when folks tied to drop them from high places, they had to do it nine times.  The cats got the last laugh though, 'cause without the cats, the fleas needed somewhere to lite and, well, that brought on the plague, and humans only have one life.

In many African cultures, the cat is considered holy  I only say this as I cite Zora Neale Hurston, an influential African-American writer of the early parts of the 20th century.  She told the story of a very hungry cat that entered a house one day and found a plate of nine fish that were going to be eaten for dinner by the nine starving children who lived there. The cat was feeling a little selfish that day and ate up all of the fish in nine quick bites. With no food on the table, the nine starving children died of hunger the very next day, along with the cat, who died from eating WAY too much.

God was so angry with the cat that he threw him out of heaven and made him fall for nine days all the way back to earth. To this day, the cat still holds the nine lives of the starving children in his belly, which is why he must die nine different times before he will stay dead.

A similar thing happened to Sally Struthers, but I digress

I had always thought it had something to do with the cat-o-nine tails.  But no.  That goes back to the 17th century.  It is a whip  much like a riding crop  with 9 tails designed to inflict much pain (oddly, from Hinduism). 9 is the complete number, and after the English invaded India, it was developed by the English Navy for complete punishment. These days, its mostly used in the S&M scene.  Brings new meaning to that song "In the Navy."

Nine is the last digit and has often represented the end.

There are 9 planets (I still love you, Pluto!).

The number 9 is revered in Hinduism and considered a complete, perfected and divine number because it represents the end of a cycle in the decimal system, which originated from the Indian subcontinent as early as 3000BC.

There are 9 circles of hell in Dante's Divine Comedy.

There are several rituals involving 9 Buddhist monks  but they also involve a vow of silence, so I really dont know what they are.

The term Cloud Nine, which usually means to be in a place of bliss, actually came from the US, from a late 40s radio broadcast Johnny Dollar. Whenever the hero knocked the villain out, the announcer said he had gone to cloud 9.

Cloud Nine was not enough for Gene Rodenberry  He took it all the way to Deep Space 9.  At least he didn't take it to District 9.

There are 9 innings in a baseball game  one for each member of the Supreme Court.

9-ball became popular when they started televising pool matches.  Watching someone else play pool on TV sounds about as exciting as watching someone play cards on TV, but people do it.  9-ball proceeds more rapidly than 8-ball because contrary to what the names would imply, there are actually fewer balls on the table.

The San Francisco 49ers are often called the 9ers  perhaps that is because they play so poorly you would think there were only 9 on the field instead of the eleven you are supposed to have.

Drew Brees of my beloved New Orleans Saints wears number 9 and the season starts on Sunday  so we do not yet have a losing record.  We are in fact #1.  Granted, we are tied with everyone else, but we are in fact #1 but will likely wind up around 9th.  (8 teams make it into the playoffs)

I figure the Saints will finally be Superbowl®-bound about the time I write the 12-12-12 newsletter but then the Mayan calendar will end, and all of the euphemisms about the saints winning the super bowl and the world ending will be true.

Wanna check it out?  https://chrischandler.org/index.php?page=news

If you would like to order an advance copy, go to www.chrischandler.org and click on the picture of the coffee can

If you would like to be a patron of the arts and get your name in the liner notes,
$100 will make YOU an executive producer.

Again, just go to my website - www.chrischandler.org - and click on the coffee can. Or send a check to the above address!

I really do need your help here.  Thanks  I could not do it with out you.

WE NEED DATES HERE!
I have irons in the fire in Fredrick, MD, Roanoke, VA, Charlottesville, VA, Winston-Salem NC, and Johnson City, TN

WE NEED A DATE BETWEEN ATLANTA AND MIAMI HERE!

Looking for something between Gainesville and New Orleans here

Looking for something in east Texas here