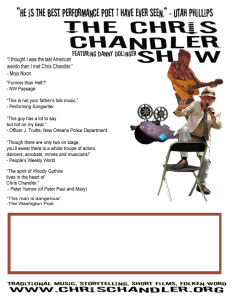 Over the next ten days or so Danny Dolinger www.dannydolinger.com and I will be in NY, MA, CT, NJ, and Philly

I am having temporary email troubles
If you want to reply to this news letter – which I am pleased if you do
Please do so to baldchandler@yahoo.com

The odds are for a few days chandler.org will not receive incoming mail for the next    few days and it will bounce.  So sorry for the inconvenience.


Ya know how when you watch news reports of say… an anti war protest that you attended, and you sit there scratching your head going – "That's not the event I was at, that's not at all what happened."

They report one hundred thousand people as a thousand.  Some right wing or even main stream media outlet would interview the most whacked out far leftist saying, "The planes… if they WERE planes… wink wink… were flown by remote control from an adapted X-box joy stick by Dick Cheney and his dominatrix, Ann Coulter  from their private bunker so he could start a war and give the public treasury to Halliburton who is using the profits to build concentration camps for any one who has ever considered contributing to National Public Radio."  Then the reporter looks straight into the camera and says, "Well there you have it, the voice of the left."

That's what I was thinking when I was watching news reports of the "Tea Parties."  I would watch the most whacked out misinformed inarticulate right wingers spout far out hate. "Nancy Pelosi's mother was a secret mistress to Adolph Hitler who satisfied his cross dressing fetish in order to keep any one from knowing the Pelosis are Masons."

I actually found myself having sympathy for the right.  I know how it feels.  The other side takes your arguments and twists them into some divisive diatribe.

Then I realized, I wasn't watching the other side.  I was actually watching Fox News.  The ones who sponsored the event.. This wasn't some left wing news channel trying to smear the right.

This WAS the right.

This was the best they had to offer.  This was actually their point of view.  HOLY COW!

My favorite moment in the news coverage was Rush Limbaugh stuttering and stammering - obviously confused about the meaning of tea bag - saying. "I gave myself a bikini wax for this?" (not in New Jersey but I digress…)

Don't get me wrong, I love a good demonstration even if I don't agree with it.  But that's just it.  This was embarrassing.  I blushed. Not since George Bush declared "Mission Accomplished," has anyone gotten it so wrong.  Now, I realize that these events were meant to be symbolic, but that's just it.  They didn't even seem to understand the symbolism of their own symbolic event.  I found myself craving tea well, at least symbolically.  Oddly many of the events actually served tea.

The whole reason America is hooked on coffee instead of tea is because of – well the Boston Tea Party.

I mean, when they called them selves "Tea Parties."  I assumed they were naming them selves after the afore mentioned event – but I am not really sure.  They did wear three cornered hats and sounded like they had drunk a few to many Sam Adams. Their ideals, however, seemed to have more in common with some blue blood aristocratic ritual involving the serving of tea from heirlooms with finger bowls and mango chutney than what happened in the bitter cold Boston winter of 1773.

Ya see, in 1773 the East Indies Company (the Wal-Mart of its day) which owned the tea that was thrown into the Boston harbor was actually receiving a tax break.  The enormous profits allowed the East Indies company to avoid middle men (ie colonial merchants who did not receive such a tax break and had no representation) and set up their own "big Box" stores driving local merchants from business.  (sound familiar?)

They should have come here to Washington DC and joined the cause for state hood.  Our license plates – by the way – read "No Taxation With Out Representation."

There are after all more… umm…. American citizens?  in the District than there are in the State of Wyoming. (Who gets three votes in congress.)

Where are those Tea Partiers on that issue.  I am sure they would be for it if only their weren't all those pesky poor black people that might be given a voice.  The radicals in Boston had more in common with Somali pirates than they do with Sean Hannity.

Somalia, after its government collapsed in the early nineties, has had foreign ships (many who considered Somali a colony at one point in their history) trolling their undefended waters harvesting seafood to the brink of extinction.  The "developed world" is contributing to the starvation there far more than any foreign aid package is helping.  But the biggie is merchant vessels steaming to Somalia for the purpose dumping nuclear waste (YES nuclear waste) in its defenseless waters.  Gotta put it somewhere.  After the 2005 Tsunami hundreds of the dumped barrels washed up on shore. Radiation sickness killed more than three hundred.

I don't think I would be to happy about seeing a merchant vessel either.

Sure many of the Somali pirates are thugs and gangsters looking out for their own self interest, just like… well those who dumped tea into the harbor in Boston.

Like America's colonial history – the closest thing the Somalis have to any sort of navy to protect its harbors are pirates. Where is Jean Lafitte when ya need him? Now, I am not justifying hijacking ships and commandeering its goods but isn't that what happened in Boston?

Is that the American way the right wants to promote?

Didn't we just have eight years of that?  It has been only a hundred days and they are already screaming change! Personally, I won't be happy until it is the fat cats out on the street, hat in hand saying, "Change?"

And the working class walking by saying, "Mission accomplished."

Over the next ten days or so Danny Dolinger www.dannydolinger.com and I will be in NY, MA, CT, NJ, and Philly.  If You have an idea for a job we could work at the end of this tour between Philly and Harisonburg, VA give me a shout.  That includes you DC, Baltimore, Silver Spring.

Other performers include Anne Feeney, The NJ Indutrail Union Council Solidarity Singers, Young & Younger
There is a $10 entrance fee which includes light refreshments, entertainment, a museum tour and preview of the new exhibit

SPEAK UP! has poets, storytellers, comedians, ranters, community activists,biology grad students from Northeastern, musicians and magicians all getting mike time. Each person that signs up gets 5 minutes. With Chris Chandler ss the feature for half an hour. You also get dinner. We have built up a little Wednesday night community. Much fun.

Anyone want to put together a quick house concert on May 10 or 11 or 12 anywhere from Philly to Harisonburg, VA
DC? Baltimore? Deleware?

We are reheared and ready to rock.

Paul and I are looking for dates on the west coast here!

Paul and I are looking for dates on the west coast here!

Paul and I are looking for dates in England after that.

Chris is looking for solo Dates in the middle of the great wide open country after that.