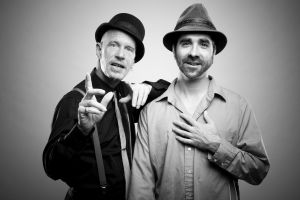 To get the new CD, click here: I want the new chandler CD  You can also get it for down load there too!

Well, it's that time of the month again…In a little known decree by the Council of Nicaea, this newsletter fluctuates on its delivery date as much as – well, Easter.  That said… here we go:

I saw a carton (I wish I could quote the source) with a picture of two cute hollow chocolate bunnies.  The first has his little behind bitten off saying, "My arse hurts."  The second has his ears bitten off replying, "What did you say?"
I laughed.  But it also led me to the question, which came first, the rabbit or the egg?

Today is, after all, Easter Monday (OK, probably Tuesday by the time you get this…make that Wednesday... night), a time to reflect upon such topics of consequence.  Our culture likes to make the Monday after a date be the official holiday.  I like it.  Three-day weekends.  Woo-hoo!

I know plenty of lefties who stand shoulder to shoulder with labor organizers saying, "More time OFF!" and then next to ACLU advocates shouting, "separation of church and state." Confusing times.

Many schools can't call it Easter break, so they call it spring break.  That's OK too.  I think a visit to Tijuana to pull 20 yards of party streamers from the mouth of a prostitute is a terrific way to celebrate Easter – no matter what you call it.  And no, I am not being sacrilegious, trust me.

Me – I usually think of Easter Monday as hangover day (which is why I am late).  See, I am not particularly religious in any traditional sense, but I do observe Lent.  Well, largely because I observe Mardi Gras, and if you are going to celebrate Mardi Gras and you don't observe Lent – you are just a poser.  Ergo – Easter: drinking holiday.

The 40 days of fasting is supposed to represent the 40 that Christ spent wandering around the dessert because, (I believe) it would be much easier to fast in a desert than a dessert – not to be confused with the 40 years Moses spent waiting to enter the promised land – having had no dessert. Or the 40 days and nights it rained on Noah, or the number of years it takes Venus to orbit the sun, or the number of days Jesus walked on earth before he ascended to heaven, or the number of years Muhammad lived before he received his calling from the arch angel Gabriel or the number of winks I need for a god nap, or the WD-40 I need to stop the squeak in my car door.  But I digress.

When I was a teenager, I ran lights for this gag band in Atlanta called the Weasels.  One Holy Saturday Night, at midnight, the Easter Weasel came and had an Easter Egg hunt in a singles bar.  OK it was the 70's and sex was still popular.

You can imagine the possibilities.  Well, actually you can't.

Now some of you may think: Oh, this is sacrilegious, but au contraire.  I remind you that I am remain a God-fearing agnostic.

I say this sort of ritual is the very essence of the religious celebration known as Easter, which is a celebration of spring.

Eostre is the Anglo-Saxon Goddess of spring whose totem is, well, the hare. The wild hare.

(BTW, The Wild Hare is the name of the first Merry Melody Cartoon featuring Mel Blanc as Bugs Bunny.  But again, I digress.)

What I was trying to say is: such a debaucherous bacchanal is downright devout.

I mean, Easter Eggs, Easter Bunnies (as in F * % K  like a bunny) can you get any more, ummmm, fertile than that?  A single doe may produce 42 kittens. Now, that's fertile.

But Chandler, you still haven't answered the question… which came first? The rabbit or the egg?

Well…  That's where it does get a little sacrilegious.  Literally.  Oddly, it is the adoption of these Easter bunny rituals by the Christians that is actually sacrilegious.  It seems they adopted the rabbit – and the egg – (and the spring time crucifixion date for that matter) from the lands and religions they conquered – or sacked (hence the phrase sacrilegious). Specifically, the Celts, where the wild hare was revered.

The date of Easter was established by First Council of Nicaea (about 325 years after the fact) as the first Sunday after the full moon  following the vernal equinox.  They called it Easter.

They named it after the Goddess of Spring, in the hopes of encouraging the Christianization of Celts.  Easter, they said, is the day Christ is reborn  – as is the earth – and you – and I – and the birds and the bees -- as wild hares spring forth from their warrens to replenish the planet.

I have to add here, the analogy between between Christ and Eoster  was a little too perfect – for Eoster noted the wild hares often burrowed in bronze aged mounds or crypts.  The Hare ascended to the underworld to come back reborn – like Christ.

The sight of baby rabbits emerging from ancient crypts led ancient people to see the wild hare as their reincarnated ancestors.  It was considered sacrilegious to eat a hare.

It was said, "To eat a hare is to eat your grandmother." Mmm Gram-ma. That's good eatin'!  Hang on now, before you start saying I am being sacrilegious.

Ya see on Eoster – or the spring equinox - eating rabbit was encouraged (really). A kind of Pagan Eucharist.

The bread is my body, the wine is my blood, the lapin a la moutarde my genetalia.

Speaking of genetalia, (OMG, I can't believe I am about to reprint this word)…The word "C % @ T" rhymes with runt ?  Comes from the Anglo Saxon word "cunny":  which means? Well…bunny. Really.

You probably know that in Spanish even the most macho slang usurers have a little gender bending issue by substituting the word   huevos (or eggs) for the word "testicles."

So, this one seems pretty self-explanatory and I will cut it short and say lots of cultures have used painted eggs as symbols of fertility  (and bunnies too for that matter),  but I will add for consistency's sake, that in the Celtic world, it seems that there was a mythical Lapin Bird (or Rabbit Bird) which had laid its eggs in the same ancient mounds, and people believed the rabbits had laid the eggs, and that they too had come from these underground crypts.

The bottom line is that life, it seems, comes from death. Death comes from life.  Christ is risen…so is Odin and Adonis, Isis and Osiris, and Marduk.  Life feeds off death.  Acknowledging that, celebrating it, holding your loved ones' hands, bowing your heads for a moment over a meal and thanking the death that the meal came from – at least to me – seems to be the point… regardless of which came first.

Recognizing the myriad of cultures our customs come from may very well be the key to overcoming the obstacles that lie before us as human beings.  Perhaps then, we as a species, not as individuals, shall not perish but have everlasting life…

…even though one day you and I both will wind up as a cartoon hanging in front of some worm's dinner table with a word bubble pointed at our mouths saying, "My arse hurts."

For those of you who do not believe in the Easter Bunny… Paul and I just got booked along with Anne Feeney to perform at the Kerrville Folk Festival.  HOLY COW!

Neither Jen nor Paul has ever been to the QVR and I need all those Kerrverts who read this newsletter to chime in step up and help welcome them into my family. We will be there from Fajita Thursday to Wild Women's Nite.

I do not have much in the way of live stuff on YouTube and I hope to change that in the near future. Please check it out.  Rate it and all that jazz.  I think it is a pretty fair representation of what ya get when you book the Chris Chandler and Paul Benoit Traveling Poetry Sideshow.  I could use some numbers, ratings and thumbs – and all that crap (Goddess, I hate this modern age)

H.E.R.E.S. .D.A. .D.A.T.E.S.
Saturday, April 17, 2010 8 PM
Berkeley, CA
A special concert to celebrate the release of the
"Until You Come Home"
Berkeley Fellowship of Unitarian Universalists
1924 Cedar (at Bonita).
Berkeley, CA
phone: 510-841-4824
Purchase tickets online: click here
Website: www.untilyoucomehome.com
George Mann, Mark Ross, Francisco Herrera and Chris Chandler (solo) on the bill! A great night of music with many songs focusing on the effects of war on soldiers and families.

Other performers include Roy Zimmerman, The NJ Industrial Union Council Solidarity Singers, George Mann.  There is a $10 entrance fee, which includes light refreshments, entertainment, a museum tour and preview of the new exhibit on Albert Shanker: Labor's Educator.


Saturday, May 1 at 10 PM
Brooklyn, NY –
George Mann  and the dynamic duo of Chris Chandler and Paul Benoit are all on the bill at this fundraiser for the New York General Management Branch of the IWW and its Starbucks campaign.
Location: Surreal Estate, 13-15 Thames Street in Brooklyn, $5 - $10 sliding scale admission. L Train to Morgan is the nearest subway stop.


Tuesday Wednesday May 4 or 5

Paul and I are in the mid Atlantic and would like to perform somewhere
Baltimore?
Please?

****Fare Well to DC show!****
DO NOT MISS
House Concert at the Home of  Elise Bryant
RSVP:

WE WANT TO FILL EVERY DATE THIS SUMMER
ON THE WEST COAST
GET YOUR REQUESTS IN!