The Muse and Whirled Retort June 2010 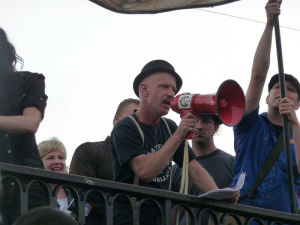 CHECK OUT:  Chandelr on local news in New Orleans at BP protest.

To get the new CD, click here: I want the new chandler CD

To support this newsletter go to http:www.chrischandler.org  and click the coffee
can to your left.

One hundred and fifty years ago, corporations were granted the same rights as people under the constitution.  Absurdly based on the 14th Amendment which was intended to free the slaves, and then used to make sure those former slaves stay indebted servants to a new over-seer: the over-class.

It is called corporate personhood.

For years, the way I saw it was if corperations are people then the Revolutionary War was more of a corporate take over.  The Declaration of Independence  should read:
When, in the course of human events, it becomes necessary for one company to dissolve the financial bands which have connected them with another.
We hold these truths to be self-evident, that all corporations are created equal, that they are endowed by their CEOs with certain unalienable rights, that among these are life, liberty and the pursuit of profit.

If "corporations" and "people" are synonimes than it is not much of leap to say The Constitution might as well read:

We the corporations of the United States, in order to form a more perfect merger, establish profit, insure domestic product, provide for the common defense,  promote the corporate welfare, and secure the blessings of liberty to our shareholders…

Ever since "personhood" was established, corporations have been winning court cases granting them due process, equal protection, freedom of speech, etc. chiefly the ability to donate to political causes in the same way that people do.
I have been against this concept for years.
But alas, after this incident in the Gulf of Mexico (soon to be known as The Dead Sea) I see the error in my ways.  I say give them full citizenship and treat them as such.

If they want the rights of citizens they should also have the accountibilty of citizens. I mean, I know if my negligence caused the death of eleven people I would be in jail. Not to mention the destruction of Mother Earth they should go to jail for mom -slaughter.

So, I say first, put the entire corperation on trial – everyone on the payroll.  How do you like you corperate personhood now?  Put 'em on trial for for manslaughter. Mom-slaughter. Put them in jail for poisoning the food chain – 'cos in prison you often do shit where you eat.

I envision not just the CEO going to prison but every congressional appologizer. I wanna see every CEO GO TO PRISON! every CFO, every CIO, CISO  CPA and CP3O-- GO TO PRISON.  Every VP SVP and VIP for that matter. They are corperate persons afterall.

I wanna see the leathernecks go to prison, the pipe fitters and every oil rig inspector and inspector of the inspectors GO TO PRISON.

And if there is not enough room in the prison, let out the guy who is in there for smoking dope in his own apartment.

I wanna see the writers and the actors in those BS BP ad campaigns "Beyond patrolium, a greener oil company"  GO TO PRISON!

As we all watch the BP bank accounts and the bank accounts of Halliburton and Transatlantic for that matter drained while they are paying the billions,.. quadrillions in reperations.

Instead what we have is a bunch of oil slick lawyers proposing caps on compensation to congress via campaign donations.

Talk about cap and trade.

I thought you guys were against that. But le' me tell ya pal your liability cap blew out when that blow out preventor valve blew and I say it is time to BILL BABY BILL!

I say you should drain your coffers by employing every idle shrimp boat captain and his crew in every idle boat in every port from Gulfport  Mississpi to clean up your mess.

Use the community we have.

Even if you spend all of the 14 billion you made in profits last year.  All of the 16 you made the year before that – you should spend every dime hiring every out of work oyster fisherman in Pensacola  and unemployed seafood resteraunt waiter in New Orleans.

I wanna see your share holders standing on off ramps holding buckets with signs that read "will work to pay locals for their loss."

And as for Haliburton and Transatlantic?  Its no wonder Haliburton droped the name "Black Water.".

Transatlantic? You knew your oil rig was too big to fail. That's why you were claiming  it was from the Marshall Islands – which is an oil company with a flag.

It should have come as no suprise that Marshall Island inspectors might be a little lax on an oil rig heading to the Americas  since America did its nuclear testing there and completely blew one of the Islands off the face of the earth.

But since you did choose to fly the flag of the Marshall Islands, I say it makes you an Illegal Immigrant and I find myself suddenly agreeing with the State of Arizona and you should be deported.  All of you.

It makes you a foreigner – and a crime like this – perptrated by a foreginer can only be viewed as foreign eco-terrorisim and the place you should be deported to is Guantinimo Bay where you can sit in your little orange jump suits and be waterboarded – with  water, from the Gulf YOU DESTROYED.

I have given up my apartment in Maryland and am now based in Oakland, CA

Paul and I have some holes to fill in August especially in Northern CA.
Can you help?

Paul and I are thinking about Texas and the gulf coast in October November.
Florida

The Chris Chandler Show with Paul Benoit
sharing the bill with Anne.Feeney


Friday, July 16th, 2010 8pm
Chris & Paul play with Truckstop Honeymoon
Alberta Rose Theatre
Alberta Street
Portland, OR
THIS WILL BE AN AMAZING SHOW!!! IN A BIG ROOM PLEASE COME ON OUT!

This event is happening but we STILL do not know if we are on the bill.
If not we will be desperately looking for work this weekend.