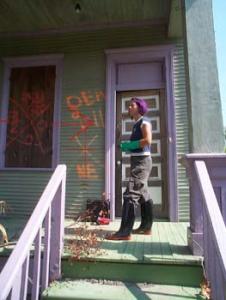 Insert grief and despair over the demise of New Orleans here. I feel it. Karen Kilroy, David Roe, The University of Western Florida and I made this video that may interest you.

Thank you for all the letters. All of my friends are accounted for though I have not heard from many acquaintances - largely due to losing contact with them, not for fear of losing them. I do have a personal list at [link] and if you have any knowledge of any of these folks please take a second to look and let me know.

I hate to say it, though if ya think about it Katrina may have been the best thing that could have happened for George Bush in the past month. It has kept the other news out of the headlines. Another 100 killed in Iraq in the past 24 hours alone. I see Bill Frist has used the profits from the sale of stock in his family's hospital company to invest in hand baskets while Dick Cheney awarded Halliburton the contract to widen the superhighway to hell. Bill Bennet had a frank discussion about abortion with John Roberts, who announced Roe V Wade would not be overturned in an effort to reduce the crime rate.

Tom Delay was indicted on a money laundering scam that would make Tony Soprano blush. The scam involved funneling money from one account of the GOP and out of another and led to the redistricting of Texas so it now looks like it was drawn by the blind boys from Alabama trying to draw a rumbas on an etch-a-sketch.

While George Bush's approval ratings have sagged through all of this it has not taken long for the right to retaliate by adding cross braces to The Neo-Con's Leaning Tower of Babel. I have been hearing stories on the news criticizing the good folks of New Orleans for exaggerating their plight. It has gone as far as conservative talk show hosts such as Neil Boortz saying things like, "they made it all up." These folks sound like the conspiracy nuts who still claim the landing on the moon was done in a Hollywood sound stage.

Yes, the death count was lower than first believed. I see that as a testament that maybe "Those idiots in New Orleans" actually do know how to evacuate - not evidence of a left wing media conspiracy.

Rumors circulated over the course of those darkest days. How could they not. Stories of "babies with their throats cut piled in a refrigerator in the basement of the superdome" turned out to be false. Thank God. But now, the right is trying to use these really understandable rumors to show that George Bush actually handled this crisis well. They even imply that all the images of poor black people suffering more than they do on a daily basis in the Desire Street Housing Project were a tool of the left wing media and may have even been planted in the Superdome just to make George Bush look bad.

Of course rumors developed - put that many people in a dark building with no flush toilets and no outside - or inside for that matter - communication and yes rumors are going to be spread. Add in a few unattended dead people lying in plain sight leaving their imagination to conjure and stories are going to form. They are not pretty stories. These are people who have just seen their entire lives float down the river. Is that not horrible enough?

It becomes on big game of telegraph. Ya ever play that in school? Ya start off with a sentence and you whisper it in the ear of the person next to you and so on. When we played it - it didn't matter what ya started with it always ended up with - "the Principal is an asshole." He was.

Play this game in a setting of people who believed long before the flood that they were being pissed on and the game of telegraph begins, "There was a baby crying because he needed changing and there are no diapers" and the rumor become "piles of dead babies with slit throats in the basement freezer of the superdome." These stories are fed by genuine fear and despair, not an armature agenda to make little George look bad. How dare you!

It is the blackest of farces (no pun intended) Pee-Wee Herman's Big Adventure meets Henry,

portrait of a serial killer. Just because there was no electricity to run a freezer and there is no basement in the superdome does not mean the events that manifested these rumors were not tragic.

Remember back to 9-11? On 9-12 we were hit with rumors of hundreds of thousands of deaths as well as super human acts of heroism such as tales of people climbing down 100 stories outside of the burning building - even one guy was rumored to have ridden a piece of sheet rock down the collapsing building like a surf board.

No one in the twin towers rode down the building on a sheet rock surf board carrying an arm full of puppies but that does not mean there were not heroes. There were not hundreds of thousands of deaths as was first reported - that did not make it any less tragic for those who lost so much.

And to be fair to the other side, Karl Rove was not seen in SCUBA gear driving an underwater car-bomb Chevy to the levee to blow it up and drown the 9th ward. Just because it was done in 1927 does not mean it was done this time. But it also does not change the setting that would make people genuinely suspect it to have happened.

Using understandable human propensity for hyperbole as cover for failed leadership is like saying Jesus Christ did feed the multitudes with five barley loaves and two small fish. He did.

Stories or rumors or tall tales or myth are actually hard scientific fact. They are the air we breathe, which is as pure or as poisonous as we make it. Air is gaseous and it fits the exact size and shape of the container it is placed in. If you put in too much pressure it will blow up. If you remove it from the container, we will live in a vacuum and we will suffocate. But if allowed to be filtered properly stories become pure oxygen. Healthy. Volatile. Highly combustible.

Thank you to all who bought a copy of "Something in the Air/But it's not on the Airwaves."

You helped make it a top seller at CD Baby! They had a contest this month and we made the

We are looking for showcase opportunities at NERFA - got any ideas?

and please have us back - weather, hurricane and FEMA permitting.

Have a radio show or write for a magazine that would review the CD? Drop me a line and I

will send you a copy!

Please visit the many first hand accounts of New Orleans at https://chrischandler.org/index.php?page=notes

Check the up-to-the-minute schedule and get more details here:

We still need shows! look at the schedule for openings.