The Muse and Whirled Retort August 2005 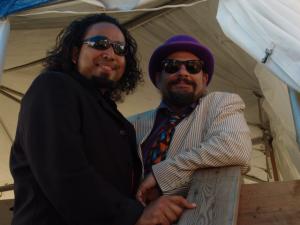 Frankie and Dr D at FRFF

FLASH FLASH FLASH ! CHECK THIS OUT! This video is the best thing I have ever done! Read why below See it by clicking:  [link]

The new CD American Storyteller is FINALLY back from the manufacturer!

Hey Everybody, It's that time of the month again... OK it's not - it's late.  Real late -  maybe the latest this newsletter has ever been - So late, I thought it  might be pregnant, and as it turns out it was.  It has given birth - to twins!

Ya see, I started performing last month's news letter as a new piece on  this past tour - and let me tell ya, I have seen the promised land!  And we  are in it.

I won't bore y'all with all of the details about how wonderful this tour  was. Dr D. David D. R. Roe and Frankie Hernandez and I proved to be a  superb squad. We've been calling ourselves Exile on Bourbon St.  Three guys and a piano  in an 86 Subaru in 40 shows. We  covered  2 Coasts, 2 countries, 4 camping festivals, ... It has been one wild 40 days and 40 nights,  the rain has begun to let up and I see the dove of peace off in the  distance, only he couldn't get the olive branch through airport security  and he looks pissed off... I don't know about you but I am breaking out the  bumbershoot - not for the rain but for fear that dove may just shit on our  head out of spite.

But I digress.  - I said last month's news letter gave birth to twins.  The first was a girl.  Last month's Muse and Whirled Retort was about how many of us out  there are against this war and how that "Left Sided media" just doesn't  report on it.  Well, D. R. and I put that notion together with a medley of  those 60s pop protest songs that we all love to sing "Come on people now!  Smile on your brother!"  You get the picture.  Well let me tell ya, they  did love to sing those songs!  But it is bigger than that.

The first glimpse I got was at a political event on liberal Vashon Island,  Washington - and the politicos got it!  Well, I didn't think too much about  that.  Of course they got it.  They are the left.  They get it.  I was  flattered, but not optimistic about the future.  Then, we did the new piece  for the tripping hippies in Oregon.  Well, they got it too!  Now, I am not  telling you this to talk about me me me - I am trying to make a point here  so bear with me... The dread locked tie-dyes hugged me... and made me realize  these people do more than just sell T-Shirts to one another.  A woman with  eyes like saucers said, "I am a yogi, and I see you in Ireland."

Well, you know me... I am not exactly Mr. Frosted Flake (though I do sing  "Breakfast Serial Killers.")  So, naturally, I did not think too much of  it.  I mean I don't even know my own zodiac sign.  I am not knocking those  that do - at least publicly because, the next day someone approached me and  said, "The Yogi told me you must go to Ireland, so here are three plane  tickets for you and your band to go."  We are going!

Yes, I believe.  I believe and disbelieve everything, simultaneously.

Someone else said, "Your band must go to the east coast, I will loan you  the money to get them there." Next thing I know I was looking out a window  at baseball diamonds until I was at a mainstream pop music festival in  scenic upstate NY.  Nothing there was political, no one (unfortunately) was  flaky.  No one on stage said anything of a people so desperate to remove an  invader that they would strap bombs to them selves in the hope of at least  taking a few of the invaders out before their own inevitable demise.

All was fried dough and expensive handmade jewelry and advertisements  promoting satellite radio and iPods.

Through an odd turn of events - we  found our selves on the main stage for a 15 minute set.  Batter-up.  I knew  this was the big league and it was an away game.  I knew if I went out I  was going to go out swinging hard.  The pitch came and I did indeed swing  hard - Line Drive, going up, up into the front porch at the top of the  hill. And that's when I knew we were in the promised land....

...Four  and a half  standing ovations!  For an anti-war piece at a general audience  event.  Nothing illustrates to me more, my friends, that we are at a  tipping point.  People are hungry for an antiwar message.  The general  population is - not just the guys with fashionable black bandanas around  their faces.

The events then began to blur like a 1986 Subaru speeding (OK Scooby  doesn't speed because - she goes about 55 down hill) down the Pennsylvania  turnpike towards Akron and before I knew it I was making (for lack of a  better word) a music video of last months newsletter.  And, my friends it  is the best thing I have ever done!

Out of thinnest of  air and slimmest of wallets Karen Kilroy and I envisioned the video.  I  wrote the script on a book of index cards purchased at a CVS in Akron, Ohio  for $2.17 after taxes.  Our budget was now exhausted but our enthusiasm  would not wane.

Every Sunday in Kent Ohio there is a peace vigil so it is there we  went.  We began to cobble together a group of volunteers.  I had written a  scene involving a modern war bride placing a tri cornered flag at the grave  of her loved one and another involving a bus with protestors arriving at a  demonstration.  Someone at the vigil volunteered to play the part of the  war bride, others said I'd love to play the part of a protestor - not much  acting required huh? Someone else said, l said, "Hey my friend has a  bus."  And with that we went to sleep.

The next morning word hit that 14 American Servicemen from Ohio had given  their lives for this country.  From a nimbus cloud filled with tears, a  broadcast quality camera fell into our open hearts...OK, it was clandestinely  borrowed from a very prominent leftist politician's production  crew.  Everything moved in slow-motion.  When we arrived at the graveyard  we found our actress pale and trembling.  She had just learned that one of  her dear friends had been one of the 14 Ohioans who had been taken so  young.  Her performance at the grave yard is real.  Too real.  The video is  dedicated to her friend, U.S. Marine Lance Corporal Daniel "Nate" Deyarmin  from Tallmadge, Ohio.

I say it's the best thing I have done - not because, I like the glossy  images, or because it is watchable like a Harry Potter Movie - but because  it is honest and contains the work of several videographer's work from  events I was at, like the G-8 in Miami, The School of the Americas Watch at  Fort Benning, GA and The counter-inauguration of George the 2nd.  I have  known for along time how many of us there are.  I have long witnessed the hundreds of thousands in the streets.

I wanted to make something that could reach the left leaning middle and  convince them to lean a little more and this see-saw is going down!

The video is why this newsletter is late.  Twins.  I have been working in 36 hour  stretches on it field on peanut butter and coffee. You can see it by  clicking the link above.  I do hope you like it.  And if you do - please  pass it on to your friends.  I want people to see it for free.  I have  funded this monstrosity purely on CDs I have sold.

And speaking of CDs, I said at the beginning that the news letter gave  birth to twins. It is true - the second is a boy. The CD!  American  Storyteller.  (I apologize for making so much of this edition about the  work I have done instead of the sights I have seen - but there is time for  everything, turn turn turn)

At 10:49 PM yesterday (the day I arrived home and the tour was officially  over) I received the new CDs.  "American Storyteller" I have been selling  nearly home burned CDs on the road awaiting for the shipment to  arrive.  But finally after nearly 50 days late they are here.  For those of  you who purchased advance copies I thank you!  I will walk them down to the post  office as soon as I can write your address on the envelope.  CD baby will  also have them - I over-nighted them this morning.

American Storyteller is a double CD enhanced with three more videos - it is  way tricked out with lyrics and special prizes and by far the best record I  have ever made. Again, I thank you for all of your support this summer!

David Roe, my new musical director has added a column to this newsletter  and is linkable here:  "The Doctor is in"  https://chrischandler.org/index.php?page=notes&display=62&from=0

D.R. and I will be embarking on a tour starting Sept 1.  You will note  there are not many dates here - we are looking to add as many as we can as  soon as we can.  We start in Pensacola.  In Sept.

In Oct Nov we want to play in the NE again as well as a circle going from  DC through Ohio down to Texas over to New Orleans and Back up to DC. If you have any thoughts please let us know.

Please, oh please if you do watch the video and you like it - pass the link  to your friends.  I know firsthand that some of you are real blabbermouths.