The Muse and Whirle Retort May 2005 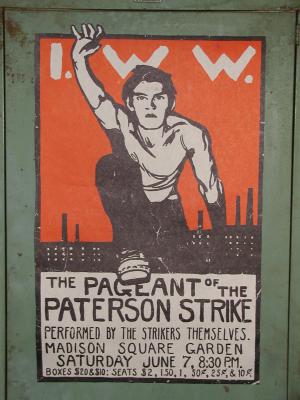 Want to buy an advance copy of the new CD  "American Storyteller?"

click here and I will send you one as soon as it is finished!

comes a little early.  I had to send this message a coupla days  in advance this month to let the

folks in New York City know about the last Saturday of April.  How often do I get a Saturday night

Last month I had a great ride on the April Fools rollercoaster.  This month we have the May Day

edition.  May Day should be Christmas for progressives.  And besides it's the 100th anniversary of

Ya see, I believe in Solidarity.

that the power of good is greater than that of evil - just not by very much.

I believe that Athena sprang from the head of Zeus, that Atlas held the world on his shoulders,

though I'm not sure where his feet were at the time.  It is the telling of the tale that makes it

In 2001, I saw an image of the Virgin Mary on a telephone pole in Miami.  When I pointed it out to

others, they saw it, too.  A crowd gathered around it.  People stood in awe and began to

genuflect. (This really happened - I have witnesses!)

I believe that every picture tells a thousand stories and every story paints a thousand pictures.

I believe that photographs, themselves, can speak.

balcony listening to speakers shout their speeches with no sound system. In the far corner of that

That child spoke to me. He looked me straight in the eye and said, "What's a hundred years between

the road to form a traffic jam.

In 1900 it cost two cents to get a letter from Paterson, NJ, to New York City, and it took two

But what's a hundred years between friends?

European imperial powers were about to begin slaughtering each other wholesale with mechanized warfare.

It had been only 10 years since the Wright Brothers, and already they were dropping bombs from

could no longer compete with the new motion-picture industry, and it went bankrupt.  The Wild West

was over. Richard Nixon was born.

Women could not vote. The Russian Revolution had not yet happened, but its electricity could be

felt on the streets of Moscow, Berlin, Madrid, Seattle, and Patterson, NJ. The sound of revolution

is exactly as loud as the sound of a rumbling stomach.

The streets of America were frenzied with the of factories. Some claimed automation would lead to

a reduction in workload. Just like some claim the home computer will reduce our workload today.

When the machine gun was invented, people said, "With this weapon, there is no way we would have

another war. Not with a weapon that could kill hundreds in seconds.  But the imperial powers of

Europe convinced the poverty-stricken to throw their bodies into the path of mechanized destruction.

The boy in the photograph told me that he had lived to see his brothers do just that.

In 1913 Henry Ford developed the assembly line for automobiles. That same year, in Seattle,

mechanized sawmills were turning the great forests of the West into toothpicks.  The state of Washington

recorded its first mudslide , but dental hygiene was at an all-time high.  That is, until the

Industrial Workers of the World organized the saw mill workers.  In Akron, OH, rubber workers were on

strike; in British Columbia, railroad workers. A year earlier the I W W had won the Lawrence, MA,

In Paterson, NJ, factory owners realized that anyone who could convince someone else to run in

silk and ribbons.  The war to end all wars was in just beginning, and there was no shortage of

officers needing ribbons. Demand was as high as the profits, but the workers were stretched beyond their

limit, so the owners introduced a four-loom system that was supposed to lessen the work load - but

in fact it doubled it. And this was the cigarette that broke the camel's back.

Thousands went on strike.  Thousands were arrested, including the boy in the photograph. But there

is no jail cell strong enough to withstand the rumble of a man's stomach. The jail cells were the

epicenter of an earthquake felt all the way to New York City. Those tremors caught the attention

of the IWW, which put together one of the best-organized strikes in history. Rallies were held,

along with weekly meetings for the strikers.  Well-to-do families in the city offered child care. The

boy in the photograph lived for three months in the home of Mabel Dodge, a prominent New York

Twenty thousand people gathered at once to raise their voices into the air.

But for every foot they moved forward, they were pushed back 11 inches. The power of good is

greater than that of evil - but just barely.

the mills that remained dead. And no amount of violence could make them come back to life. The

only thing that could break that picket line was the mightiest force on earth: the sound of a

intellectuals who realized this first. Food was needed. So, Jack Reed began work on a play. The earthquake

erupting in Paterson was just a tremor warning of the Ten Days That Shook That World.

He took that play and it turned it into a fundraiser, though you wouldn't find his name in the

program.  Big Bill Heywood and Elizabeth Gurley Flynn spoke, though you wouldn't see their names on

the marquee.  Famed scenic designer John Sloan created the set, though you wouldn't find his name

in the credits. No, all you would find would be The Pageant of the Paterson Silk Strike Performed

by the Workers Themselves.

In June 1913, Madison Square Gardens was filled to capacity.  The striking workers acted out the

events. One thousand striking millworkers joined Actors Equity to perform one of the greatest

moments in American theater: They told their own tale.  The audience cheered with each triumph and

booed with each setback - no rock concert could re-create the enthusiasm of that crowd. They made

The boy in the photograph was there. He was one of the tens of thousands in the audience at the

end, in standing ovation, fist in the air, singing the Internationale at the top of his tiny lungs.

The play received overwhelming critical acclaim. To this day, it is considered one of the most

important moments in modern art. Few performances in human history can match what happened on that

stage that night. But, like too many great works of art, it lost money.

How could it not? Too many people were let in for free. How could they not BE? How can you ask a

family to pay to see a play their striking father is in? You can't.  The boy in the photograph did

Without financial support, the general strike began to decay - the workers slowly went back to

work. Many would say it was the end of the IWW.

But the truth is, it was only the beginning - at least for their goals.   There is no way to undo

the jubilation of that crowd - their sentiment was in the air. The songs had been sung and they

could not be unsung.   There could be no such thing as victory without first there being an

Listen to the blues.

If dreams were real, there would be no need for dreams. In a world of no dreams we could only

Ya see, the workers may not have gotten everything they asked for - in truth, they went back to

work under pre strike conditions. BUT their original grievance - the four-loom system was not

implemented for another decade. AND a few short years later - On March 15, 1917 - Congress enacted what

the Pageant of the Paterson Strike demanded: the eight-hour day.

Three years after that, women could vote.

There has always been a very fragile bridge between intellectuals and laborers. Intellectuals

intellectualize millworkers, and weavers weave the clothes of the intellectual - they cannot be the

same thing.  The bridge is there, but it is fragile.  Few can will make it across.

Perhaps the photograph of an 8-year-old boy hanging in a museum in Paterson, NJ, can cross that

bridge. Perhaps 1000 striking workers telling their own tale can cross that bridge. Once it is

crossed, there is no end to what can be accomplished.

It is the telling of the tale that makes it so, just like the Easter Bunny, and the Tooth Fairy

and the greatest story ever told.

history.  It will be awesome!  It's working title: American Story Teller (tales of a new American

revival)  I can't say enough about how excited I am about it!  If you would like to ummmm... share in

There are other ways you could help too!   https://chrischandler.org/index.php?page=notes

A donation of $100 or more will put your name in the liner notes!  Poor but wanna help anyway?

I am still looking for help with my fledgling video project - a series of short films about...

about... ummm...  struggle and hope... and just how funny that really is. (I'll just say they are not another

vanity video from another Singer songwriter whose theme is really HEY! Look at ME perform MY SONG!

HEY!  Here is ME from ANOTHER angle, and in another fashionable outfit)

David D.R. Roe.  He is arranging the music for this album too.  So far - it's a smashing success.

No Kerrville for me this year.  The first time I have well... voluntarily missed it since I first

came to the ranch back in the H. W. Bush administration.

In July,  I will be doing a west coast tour with the unbelievable Frankie Hernandez!  You will

remember him as the blazing trumpet player from my Convenience Store Troubadour Days.  There is a

rumor that Chad Austinson my join the tour at some point too!  Don't wanna miss that!

Younger and Paola Corso. There is a $10 entrance fee, which includes light refreshments,

entertainment, a museum tour and preview of the new exhibit on Albert Shanker: Labor's Educator.

154 Ludlow Street (between Stanton and Rivington),

(Just visiting, but I'll be camping and swapping songs)

(I am one of many fabulous acts on this bill)

An evening with Chris Chandler and David Roe

Looking for something in Oregon or Washington

The Oregon Country Fair - Eugene, OR

Looking to fill this date in the NW

Looking to fill this date in the NW